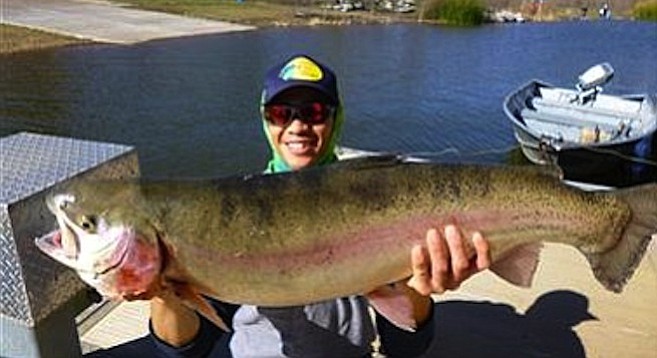 With opening day for trout fishing at Lake Wolhford this Saturday, December 13, Escondido’s public works department is making sure it will be a record opener. Lake ranger George Scako reports that 6,000 pounds of Nebraska Tailwalker rainbow trout will be planted by the opener. “Much more than last year,” said Scako.

Scako reported at the November meeting of the Escondido Senior Anglers that a joint agreement was brokered between several of the local water district’s lakes to purchase Tailwalkers in bulk from the Bridgeport, Nebraska hatchery. The lowering of costs gave local districts the financial ability to purchase more fish.

Even though the Nebraska hatchery has to drive their trucks straight through over a two-day period, local fishermen say the extra cost in transportation is worth it. Tailwalkers are becoming the prized fish in local lakes, as well as up and down the Eastern Sierras.

Tailwalkers generally start at several pounds in size, while most California Department of Fish and Wildlife plants weigh less than a pound — same for those coming from closer private hatcheries in Whitewater (Palm Springs area) and Lassen.

The Wolhford trout season should last until mid-April if we have a normal winter. Water temperatures have to be cooler that 70 degrees for trout to survive. Escondido’s other lake, Dixon Lake, had to delay its scheduled November 12 trout plant and its 36th annual Trout Derby until December 5, on account of the warm water.

Ranger Scako reminds that no personal boats, kayaks, or float tubes are allowed in the lake due to the invasive Quagmire mussel, which has attacked most SoCal warm-water lakes. City-owned boats are available to rent.

Built in the 1920s, Lake Wolhford, in 1952, became the first lake in the county to start planting trout. In 2016, construction of a new, larger, and safer dam will begin. Once completed, the surface water area will be doubled from the low, drought-reduced level it is today. “That’s assuming we get rain,” said Scako. Wohlford’s watershed is from snowmelt and wells draining down from Palomar Mountain.