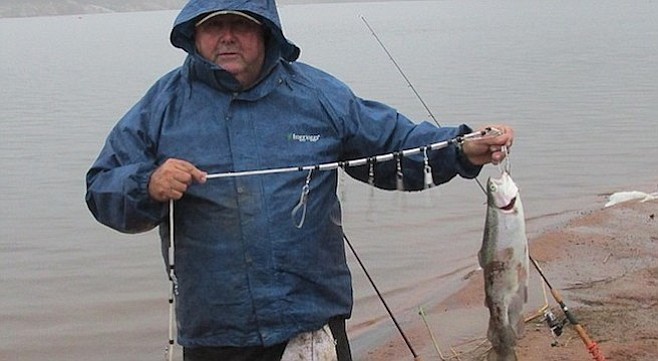 On Friday, December 12, Ben Holden of Escondido caught the first trout of Lake Wohlford’s 2014/15 season. The two-plus pounder Nebraska Tailwalker rainbow was snagged on a nightcrawler and garlic Power Bait, around 6:50 a.m., off the “Senior shoreline.” Holden caught another one of equal size shortly after that.

While the official trout season starts on Saturday, December 13, outdoor media, local fishing club leaders, and select employees of the city of Escondido had the opportunity to try their luck earlier, on Media Day.

Windy conditions at the 6:00 a.m. start did not detour the invited anglers. Neither did the four hours of heavy rain that followed.

Lake rangers said they are expecting the best opener in years, with 6,000 pounds of Nebraska Tailwalkers planted on December 10.