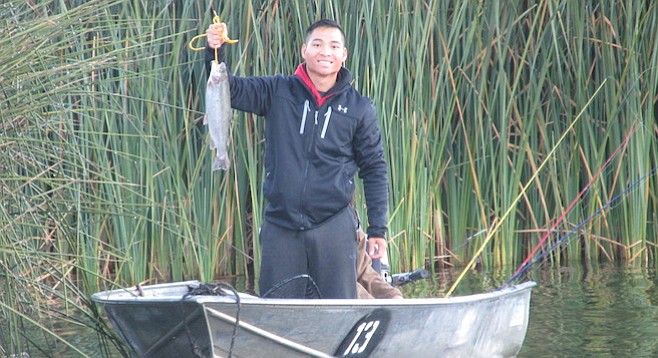 City of Escondido plans to stock 25,500 pounds of rainbow trout

Before first light, in the early-morning low-40s temperature, over 200 fishermen hit the opening day of trout season at Escondido’s Lake Wohlford. The December 12 opener was preceded a few days earlier with a 6000-pound plant of Nebraska tailwalkers. The rainbow trout are prized for their larger size and fighting ability.

The 6:00 a.m. start time saw anglers filling up what’s known as “Senior Shoreline.” Also, numerous rental boats were in the water, very close to shore, east of the dock. Most of the shore fishermen kept a close eye on their poles while hiding out in their warm vehicles. Some thought to bring portable propane heaters.

It was pretty quiet for the first hour, with only one fish being landed — a two-pound tailwalker at 6:30 a.m. to Thai Dinh of Bonita. His rainbow PowerBait did the trick.

Ranger George Scako said the opening-day fish bites usually start around 7:20 a.m., when the sun peeks over French Mountain, rising on the southeast side of the lake. 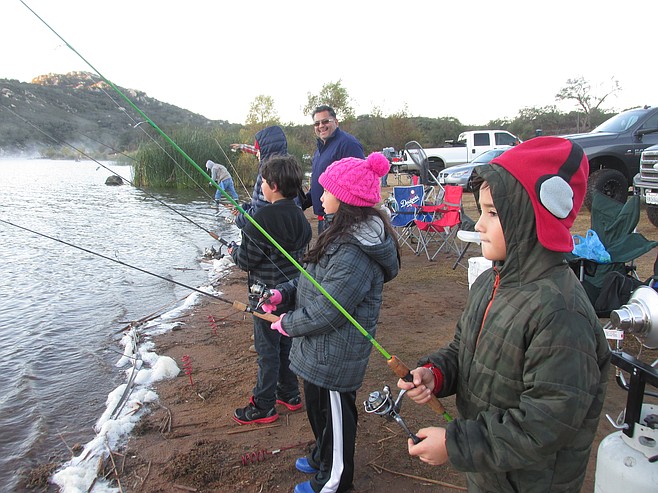 Grandpa Raul and the grandkids

The Medellin family from Downey didn’t realize it was opening day until they arrived before dawn. Grandpa Raul had his five grandkids — Diego (8), Alyson (9), Tristen (8), Cesar (12), Seth (10) — all hooked up with mice tails (a manufactured bait). When asked who was the best fisherman, all the siblings and cousins pointed to Diego. Diego seemed reluctant to accept the nomination but finally did. 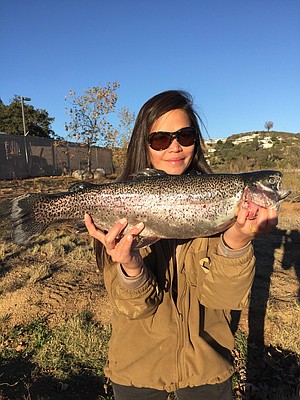 Alyca Pia reeled in the whopper

At around 10:00 a.m., Dinh’s #13 rental boat brought good luck to him and his wife, Alyca Pia. Having moved to about 50 feet west of Senior Shoreline, toward the dam, Pia landed what would be the biggest fish of the day — a 7 lb., 2.5 oz. trout, using the same flavor PowerBait as her husband used catching the opener’s first fish.

The City of Escondido, like many municipal and water-district-owned lakes in Southern California, has given up on the budget-strapped Department of Fish and Wildlife’s stocking programs. Facing the state’s annual reductions in planted numbers and size of trout, most lakes who want to keep anglers on their shores now purchase trout from independent hatcheries in Northern California.

Daily fishing permits for those aged eight and above are sold at the Lake Wohlford Café, across the street from the lake’s parking lot. Between the opener and April 20th, the City of Escondido plans to stock 25,500 pounds of rainbow trout, generally 1500 pounds every Wednesday. Unfortunately, due to the low water level, private watercraft are not allowed on the lake.