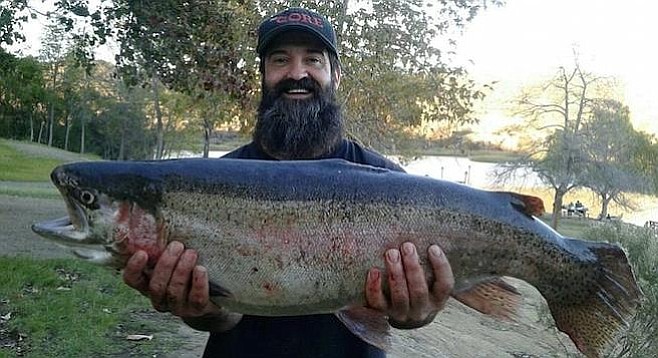 Who will drive the trout to Escondido next season?

Unfortunately, this may be the last year for large, record-setting Nebraska Tailwalker trout at three local lakes. The three-year contract with the Chaulk Mound Trout Ranch hatchery in Bridgeport, Nebraska, ends April 19, the last plant scheduled for the local 2016–'17 trout season.

“They have notified us they can no longer sells us fish at the current $3.49 a pound,” says Dan Hippert, head ranger for the City of Escondido’s Lake Wohlford and Dixon Lake. “They say it doesn’t cover their costs to drive to California anymore.” Ron Bright, owner of the hatchery, stated in an email he could not comment on their future business plans.

The city purchases 34,500 pounds of Tailwalkers each year for Dixon Lake; 24,000 pounds for Lake Wohlford. To increase fish poundage by saving transportation costs, the City of Poway coordinates with Escondido’s contract for their annual purchase of 20,800 pounds for Poway Lake.

“We’ll have to put it out to bid,” says Hippert. “There are only a one or two hatcheries that can possibly service us. The Lassen hatchery [a Northern California hatchery that stocks other SoCal lakes] has already informed us they might no longer be serving Southern California. There’s one in Idaho that delivers to Lake Jennings.”

Hippert said a request for proposal to all hatcheries, to get bids, will be issued sometime around August.

The city will have to decide to either increase the stocking budget or reduce the poundage of fish purchased. In the Eastern Sierra, the City of Bishop, Mono County, and resort operators along Highway 395 spend about $5.75 a pound to stock Alpers Hatchery trout, usually three- to seven-pounders.