Ex-Republican Assemblyman turned Democrat Nathan Fletcher, duded up in a tuxedo and wearing a red rose, hoists a glass of the bubbly in front of an executive jet on which some very white looking corporate types are preparing to embark. 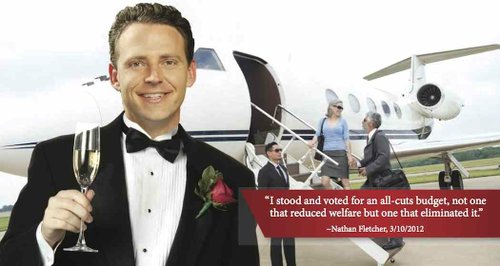 2011: As a Sacramento politician, Fletcher was the “lead negotiator” to get Qualcomm a multimillion dollar tax break.

As previously reported, political insiders have expected the gloves to come off in the Manchester versus Jacobs battle for control of city hall, and the first volley is a doozey.

Rarely have San Diego's monied classes faced off so directly against each other, but Manchester and Jacobs are unusual animals.

As reported here in August, the Republican U-T owner has aligned his paper with the Virginia-based Franklin Center for Government and Public Integrity, which the Columbia Journalism Review has reported has financial ties to the Kochs.

Manchester and Jacobs each has his own local media base; Jacobs has funneled at least $3 million into San Diego State University's KPBS broadcasting operation and is a major financial backer of the non-profit Voice of San Diego news and opinion website.

Like Manchester, Molasky has thrown considerable financial weight behind the Lincoln Club and Republican-endorsed city councilman Kevin Faulconer for mayor.

As reported here last month, Molasky's leaseback deal with the federal government to build a palatial FBI building in San Diego is now under scrutiny by Republican Senator Charles Grassley, who has released emails and related documentation showing it was financed by Chinese investors seeking U.S visas.