Homegrown Hour video series takes a drive thru the dives 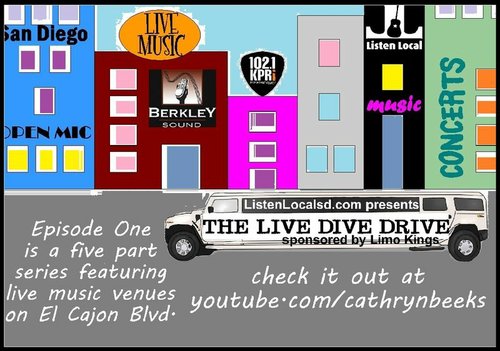 "This first episode features six live dive venues on El Cajon Boulevard, interviews with staff, and 'the history of' by correspondent Wayne Riker. It's rough and raw, but fun. Next episode, we head to North Park."

For the first episode, Beeks is joined by Jeff Berkley (Berkley Hart) and over a dozen friends, in a limo sponsored by LimoKings.net, to visit 'Til Two, Void, Soda Bar, Last Call, Chico Club, and Go Lounge.

Beeks' association with San Diego's Homegrown franchise dates back to when she inherited the radio show from Astra Kelly in summer 2009. The Homegrown Hour was a KGB radio staple in the ’70s and ’80s, originally hosted by Jim McInnes, whose “Homegrown Nights” at venues like My Rich Uncle’s also spawned a series of Homegrown albums from 1973 to 1984. KGB promotions director Scott Chatfield next hosted Homegrown Hour, which has jumped radio stations and had numerous incarnations.

Beeks also hosts a series of local band showcases around town ("mostly free") called "Listen Local." "It started with my open-mike nights as a chance for newer, inexperienced bands and performers to get exposure. I adopted the Listen Local name...and dropped the 'open mike' connotation. Now I have big-name acts like Gregory Page coming to play alongside the lesser-known locals -- for fun, and also to expose their music." The Listen Local showcases take place at various venues.

Local performers are invited to sign up for a showcase. "A band doesn't have to send me a promo kit, they just need to sign up to play." Interested performers can visit www.listenlocalsd.com to view a calendar of bands, venues, events, and available openings for new acts.