Calexico performs tonight at Belly Up (143 S. Cedros Ave) in Solana Beach. The band, made up of Joey Burns and John Convertino, plays eclectic Southwestern music. How do you define that? There's a jumble of descriptions to pinpoint their music: Tex Mex, roots rock, indie, desert noir, country. It's all of that and more. The Dodos open the show. Tickets cost $24 and doors open at 8 p.m. 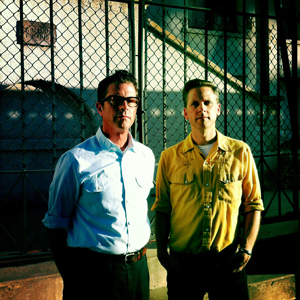 I asked what Meryl Klemow of Belly Up what she was looking forward to at the show. "Horns," she said, "and a fun, lively crowd, and the smiling faces on the Calexico guys. The Belly Up office has been enjoying their latest album, and we are excited to hear our Calexico favorites yet hear new tracks as well."

What about The Dodos? "The Dodos--what we call those who wait until it's too late to see this show!" Enough said! The show starts at 9 p.m.

"Maybe" by Calexico and Iron and Wine: