The Steph Johnson Trio returned to 98 Bottles last night, filing a new progress report on the singer/guitarist's incremental ascension into the jazz world--and earning high grades in the process.

The trio is an actual, organic unit--this isn't just some singer fronting a back-up band. Johnson's countless hours in "the-woodshed" are paying big dividends--particularly in her guitar work--and in her repertoire, with new originals and expanding assimilation of the Great American Songbook.

Her voice continues to impress: she can do the vocal-acrobatic thing--but she pares down the ornamentation to a naked essence--and it's impossible to hear her without thinking words like soulful, smoky and bluesy.

Rob Thorsen is the perfect bass player for this band--he's a total groove-master, and his dark, woody tone and supple lines light the path for Johnson to do her thing. Fernando Gomez is rock solid, and very tasteful. 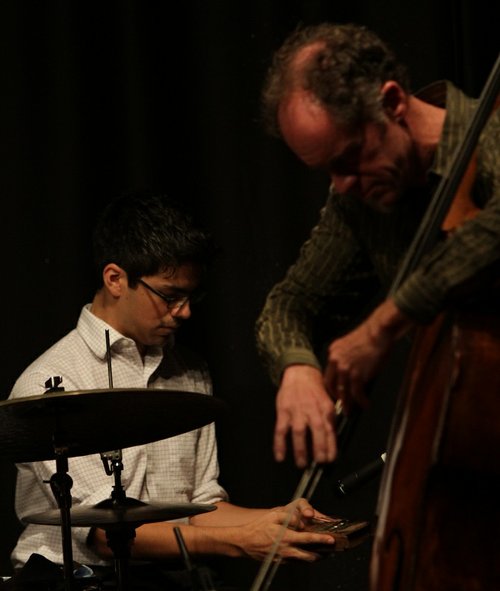 Opening with a very loose adaptation of Nat Adderley's "Work Song," Gomez' catalog of rim-shots and Johnson's ever-more-natural comping set the stage for Thorsen to connect with his inner "blues-connotation" in a nimble solo.

"Speak Low," a new one for Johnson filtered her smoky vibrato around Thorsen's virtual "time-machine" walking bass lines. Johnson can swing, one of those required attributes that I'm not sure can be taught--Thorsen has long admired her rhythmic ability--no doubt one of the connections that make this unit sound full--even with just three players.

Johnson's ebullient, autobiographical, "Big Life," was next, and when she stepped back from the microphone three feet or so--her voice still filled the room like a Mack truck. Johnson even snuck a short, rhythmically charged guitar solo in for good measure.

"Compromised," another Johnson original, is a personal favorite of mine--ostensibly written for "a friend," the singer admitted she might qualify as the protagonist as well. The piece is a tale of online-dating, a propensity for choosing "Mr. Wrong" and the big, James Brown chord in the middle.

I like how Johnson keeps working at perfecting her craft. She's aware that this is a journey and she greets each day "loaded-for-bear" and ready to hit it.

What a great review of "The Girl". I raised that child and she still sweeps me off my feet.