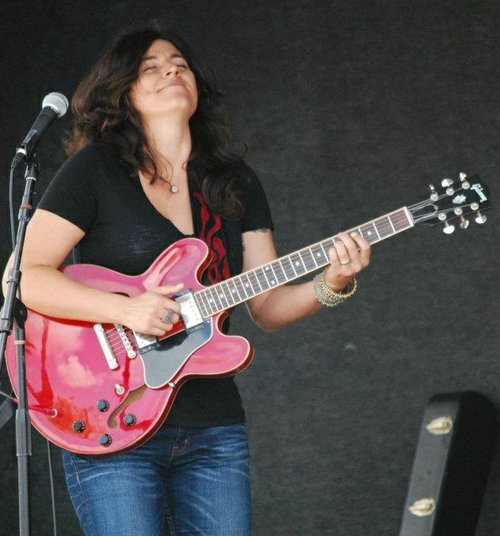 I last experienced, and commented on SD musician Steph Johnson four months ago, right when she was taking her first steps in transforming from her comfort zone of soul music with a dash of jazz to a more jazz-centric idea that included the birth of her trio with bassist Rob Thorsen at the center.

Thorsen is still involved, and powerhouse drummer Richard Sellers has been spelled by the young percussion phenomenon Fernando Gomez.

The trio has had the benefit of a short tour through the Southwestern states and a few local gigs as well, so last night's show at 98 Bottles seemed like a prime opportunity to gage how the Steph Johnson Trio idea is coming along.

It's coming along very well.

Johnson, the musician, has many tools in her toolbox, but none with a sharper edge than her amazingly protean voice. Many of the highlights of the concert came when she ventured off-mic, (sometimes way off-mic) to belt out some scat singing or other vocal adlibs. I've never witnessed any singer with the kind of "unplugged" power this girl has.

Beginning with the chromatically descending dominant chords that set up her original, "Chocolate," Johnson excelled at presenting simple materials in bare-bones format illuminated by the strength of her gritty, soulful delivery.

The "MVP," award in the trio must go to Thorsen, who carries the weight of harmonic motion, rhythmic surety and soloing interest on his shoulders. On the more harmonically limited original material, Thorsen creates solid and musical vamps and ostinati, and several times, he sounded like a blend of James Jamerson and Eberhard Weber, with his warm, deep lines.

It all came together for me when the trio hit Gershwin's "The Man I Love." Johnson's guitar playing has come a long way since I last saw her--she glided along the wave of Thorsen's groaning whole notes and the whispered brushes of Gomez in sublime fashion. Her impassioned vocals on top, with tasteful melissma and spot-on improvisation provided a clear sense of the promise of things to come.

Even though there were some flubs on the turnaround to the Nat Adderley classic, "Work Song," the spirit of the blues is one of the most shining attributes Ms. Johnson possesses. Her guitar solos are best experienced when she shadows her vocals a la George Benson. Vastly improved, is her ability to comp for herself and sustain a swing groove.

She is also a natural, it seems, for Bossa-Nova grooves, like the arrangement of "East Of The Sun," which moved along very nicely. I'd love to hear her get some Jobim under her fingertips.

Young Gomez is developing into a serious force in the SD drumset community. He fired off a few inspired solos last night, and was always moving the groove forward. Whether it was swing, Latin or soul-jazz-- Gomez has the goods.