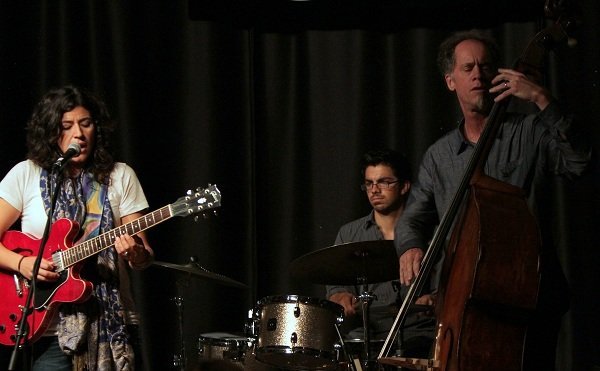 Guitarist/vocalist Steph Johnson has embarked on a journey-to-jazz that began a few years ago--but may have been inevitable, all along. Johnson's singing voice is an amazing instrument--the result of growing up in a house where the music of Ray Charles, Donny Hathaway and Stevie Wonder was omnipresent.

She had already built a sizable audience for her own brand of original music based on soul and r&b when she made a dramatic departure after a casual conversation with bassist Rob Thorsen in the green-room at the 2011 Ocean Beach Jazz Festival.

Since then, Johnson has been performing in a trio, initially with Thorsen and powerhouse drummer Richard Sellers, and ultimately with young drum phenomenon Fernando Gomez. Thorsen obviously saw something worth championing in the singer--because face it, he already plays with everyone.

Last night, Johnson's trio with special guest, multi-instrumentalist Dave Millard ascended to a new milestone in her nascent jazz career with a standing-room-only performance in The Back Room at 98 Bottles.

By the time they hit the second tune, a bossa-nova reading of "East Of The Sun," a definite blue-print for the evening was set. Thorsen carries much of the weight in this trio with extremely solid time as well as a deft sense of ornamentation that always leans forward. Johnson's voice-- husky, pitch-perfect and athletically sound, spiraled around the melody with lithe contours. 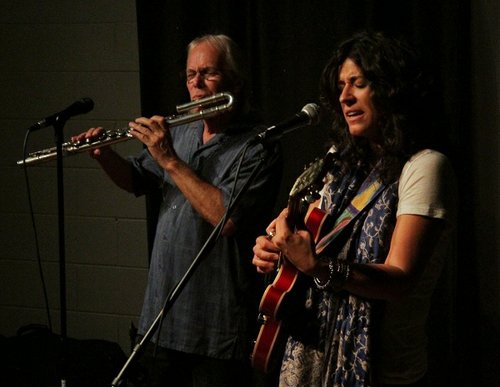 Thorsen's upright version of the Motown hero James Jamerson's ability to create immediately deep grooves was well represented in his intro to Johnson's "Chocolate," a sensual incantation on desire. Occasionally, Johnson's reliance on melisma goes a little over the top--but to harp on that is kind of like bitching about Tony Gwynn only hitting singles--it's a big part of who she is.

The guitarist's facility to swing got a workout with Cole Porter's "Anything Goes," her comping is developing nicely and her bluesy delivery of the lyrics was a cool change of pace from how most singers approach it. Gomez and Thorsen got into some heated exchanges of "fours" to open it up a little, as well.

Johnson fairly tore "The Man I Love," a new one, with a gutsy, grainy vibrato-- and Thorsen laid down a bass soliloquy that lit the path for one of the guitarist's few solos--in which her vulnerability became an act of intimacy--a profound contrast to the confidence she exudes vocally.

Hearing the guitarist evoke Bill Evans' original chord-voicings for the intro to "So What," was a surreal experience. Thorsen put on his Paul Chambers cap and the whole band jumped onto the form.

Things kicked up several notches when Johnson invited Dave Millard to the stage. Millard was a ubiquitous force on the SD free-improvising scene back in the '70s, and he's only gotten better since. On "Lover Man," Millard's alto flute wove an intricate tapestry around Johnson's vocal, and his solo added a spiritual dimension to the proceedings that transformed the piece.

Thorsen's fat, funk lines combined with the young drummer's percolating snare and tom rolls to set up a dark and mysterious vibe to the warhorse, "Caravan." Johnson was all over it, vocally and Millard exploited a fine mix of flute flurries with exotic effects like over-blowing and vocalizations. After a brief trio improvisation, Millard returned on soprano saxophone to knock it out of the park with wild streams of notes in free association--it reminded me of the galvanizing effect that Branford Marsalis brought to the music of Sting back in the '80s. This is a sound that she would be wise to expand on.

Johnson, I believe, could be heading for really great things in the future. Many of the pieces last night are from her brand-new CD, with Thorsen and Gomez, titled Nature Girl. That's a fitting description for a musician who seems so natural. Check it out, and be sure to catch this group at the next opportunity.

Robert's comments about all the excellent musicians in that band, with his usual flare, is right on the mark. That performance was great, and Dave Millard made it that much better. Solid. Got to see all of them again.