Todd Gloria Mayoral signs ready pre-Pride and Filner has NOT even resigned!!

Just in case you needed more evidence that this public lynching of Filner was planned, here is more ----These amazing Todd Gloria 2013 Mayoral posters circulating for Pride weekend ---- and Filner has not even resigned! Hmmmm, Did someone have a little foresight?

Donna Frye held her Press Conference yesterday asking Filner to step down. Filner, today announced he will welcome a full investigation into the charges and will not be resigning.

Todd said this in regards to Filner:

"As a San Diegan, I am asking Mayor Filner to resign.

"The Mayor and I have had significant disagreements on a wide variety of policy issues. My request for the Mayor's resignation is not based on any of those differences. The severity of these allegations, and the legal and financial risk they pose to the City and the taxpayers, cannot be ignored or understated. Our City government cannot maintain the full faith and trust of the people of San Diego if Mayor Filner continues to serve in this office.

Finally, as the Council President, I know how difficult it will be to accomplish the critical business of the City if the Mayor does not step down. We must quickly restore trust in San Diego and its leaders. I look forward to working with my colleagues on the City Council to lead San Diego through this difficult time."

Really Todd? Does it have anything to do with these big glossy posters of your 2013 mayoral run that were coincidentally already printed today when you made this statement?

Was this all planned far in advance and Todd knew he would be replacing Filner? After all the Republicans announced yesterday that they just happen to have been following Filner with cameras -- I believe a precursor to lay groundwork for WHY they have Filner's misconduct on video.

The players appear to be in a frenzied panic to get Filner to resign ASAP and I suspect it's because they do not want their evidence to be vetted. Why have the women refused to file their complaints officially? Is it possible they were working under assumed names? Do they have a connection to the Republican Private Investigator who was following Filner? I think we have a right to know.

Why the big rush to judgment? Can't we wait a little bit and see what emerges? There is a lot at stake and we are being bullied by our government that is desperate to restore power to the old power-brokers that Filner kicked out of City Hall.

No doubt a deal has already been struck behind the scenes to make Gloria mayor. In fact I would submit that the Republican candidate will just be a place holder not intended to win. Why would they need a Republican when they have Todd? 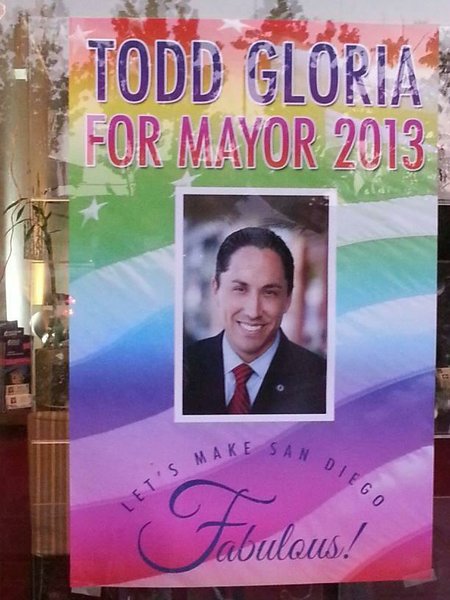 Thank you Matt as always for your insight.

This is like a bad movie, with that poster.

Yes Katie, your slimeball boss had nothing to do with the poster- it came to one of your "supporters" through a vision/.......LOL! You guys kill me....

Oh no, an untrue post! Trust us, we have it on good authority that wannabe Mayor Todd Gloria had these posters prepared in time for the Pride Parade. We can't reveal the printers' names because they are frightened and traumatized, understandably afraid to come forward. Let me assure you, however, that the posters were produced in a union shop.

It looks like the gloves are off and anything goes henceforth.

This sign was made by, and is in the window of, the realtor across the street from the rainbow flag in Hillcrest. He was standing outside his office during the Pride Rally talking about how he made it. Not only is this article completely false, they didn't even take the time to ask the business that had it up where they got it, because the guy was really proud he had made it himself. There is ONE of these posters in existence. I'm guessing you just saw the photo on someones Facebook and rattled off something to fill space. A sad excuse for a journalist.

My real name is Dan Cassidy and I am the broker/owner of Principle Real Estate Group where this is posted.

We made this poster to be silly.

I actually found this article because Travis White (the artist who actually made it) emailed me the link (captioned: "Its a conspiracy..hahaha")

The guy outside the office was my associate Jason Lamy (who is an excellent agent by the way) who helped greatly to put it together.

However, I do not work for him.

Do you really think he would adopt that silliness as a slogan?

really u just happened to have a heads up that there would be a mayoral race in 2013? This poster was up the day after the 1st press conference. How did u know? NOT BUYIN it!!! This has set up all over it!!! And Todd has been promised the mayoral seat! ask questions ppl!!

Hard to believe I have to explain the proper use of "fabulous" in a gay context, but as a public service, here goes:

He's talking about the slogan at the bottom of the poster, which is meant to get a knowing chuckle from a gay audience.

Would you like me to provide any more gay-to-straight translations? Bears, perhaps? Lipstick lesbians? Breeders? I'm here to serve.

Would you like me to provide any more gay-to-straight translations? Bears, perhaps? Lipstick lesbians? Breeders? I'm here to serve Another dumb comment.....Randy, grow up.

Very amusing poster. Matt does make some good points in regard to the main issue, but he was apparently quite taken in by whomever sent him the photo. Or, he too was being funny. Hard to say.

Yeah surfpuppy. I do consider politicians (and making fun of them) silly and amusing. This aint the DPRK. I voted for Filner but I believe he is being framed the same as I believe Sandusky and OJ were framed. Too many accusations from too many people. We can't unelect him unless he commits an actual crime. However, we can totally pressure (or shame) a politician into resigning. Or just print alternative history posters. Next I want a "re-elect Gore in '04"..... That would be cool.

lets put the posters thru due process...will be interesting to see Todd Gloria testify under oath about the posters on whether he had knowledge or a part in them......

It's not nice to harass women. If they come forward, they can be cross-examined to see if the developers are behind this effort. There are billions of dollars at stake for developers who want lax regulations.

If the complaints were made by many credible women who lack bias and whose complaints are corroborated, then we can trust that Filner would resign.

But the fact that there is so much money at stake for developers casts doubt in my mind.

There is no urgency. Let's see "due process" and examine the witnesses under oath.