Lesson one: take the plastic wrap off BEFORE you toss the patty on... 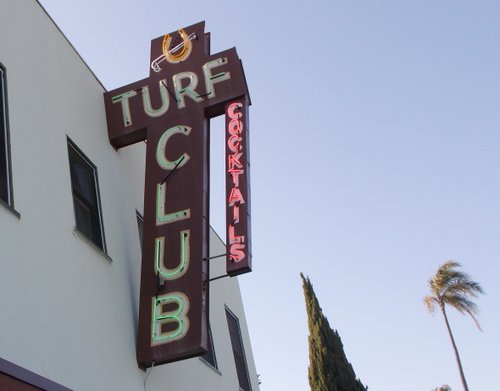 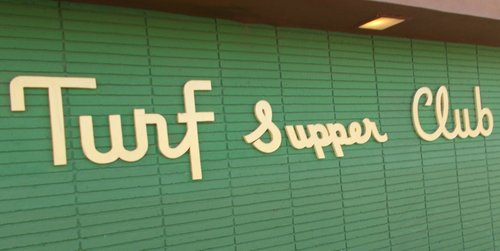 As usual, you come in out of the glare and see, well, nothing except the glowing red ceiling. That’s it. Aladdin’s cave.

Then the bar gradually appears, and wow. A whole rack of people drinking, eating. 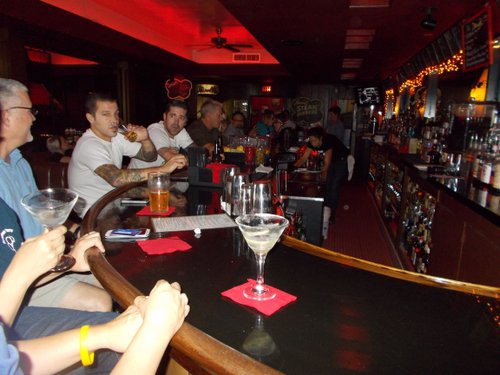 So I kinda feel my way to a bar stool, cling to the bar, and look for a menu.

Turns out it’s simple, if you’re into HH.

He says the burger’s hard to beat, so I ask for that, and splurge a little and get a Ballast Point Sculpin beer. American IPA. I pay $6. Normally $7. Beers are $1 off in happy hour. I could’ve had most others for $5.

So pretty quick, Jackson’s back with my burger. 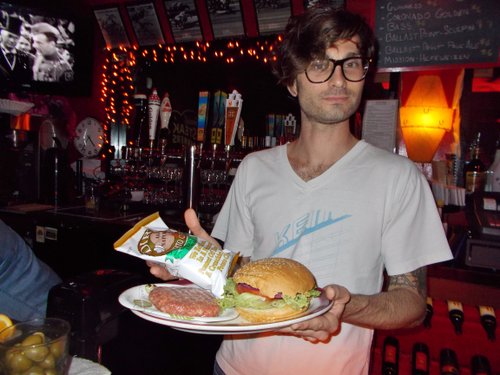 I notice another flat patty beside it.

“Uh, no, that’s the patty. Raw. You cook,” says Jackson, like Tarzan speaking to Jane.

So okay, that’s just the first blooper. I ask Jackson about technique.

“Throw it on, leave it there for five minutes, flip it one time and cook it for another five minutes,” he says. He’s patient, even though he must have to go through this routine 1,000 times a night. “And stick some Worcestershire Sauce on.” 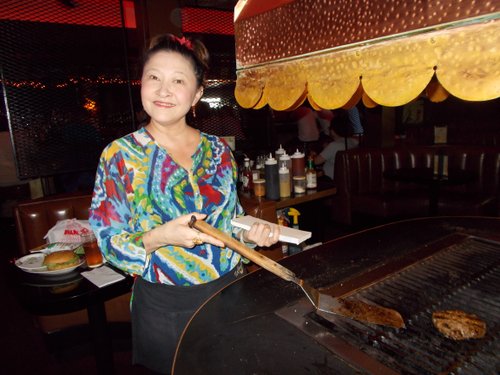 ...points me to the hot grill, like the tribal fire, in the main room... 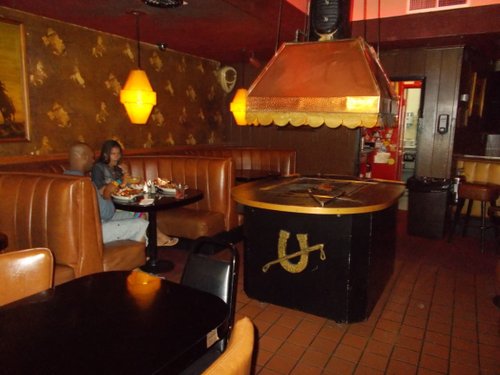 ...and I’m just about to throw the patty on, when I see it glint in the low light.

“Yes, we get people doing that,” says Michelle. “But usually later at night.”

Meaning, when they have the excuse of being pretty drunk, I guess.

This guy Dan turns his Del Monico steak over. 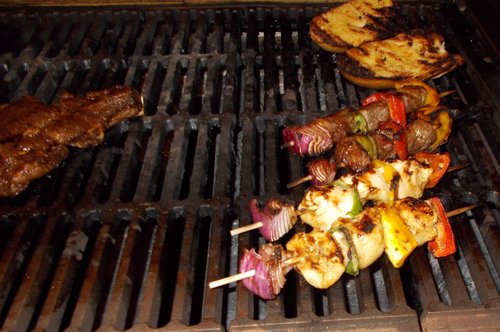 Kabobs, plus Dan's Del Monico on the left 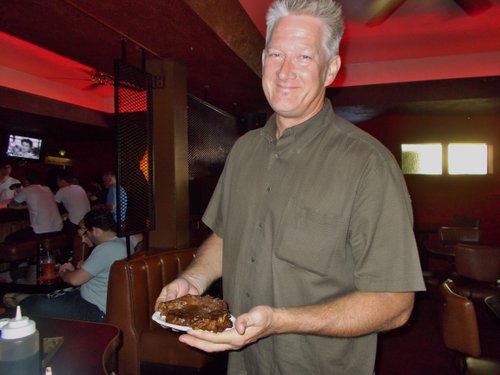 Dan hauls his off, I put mine on, douse it in Worcestershire. 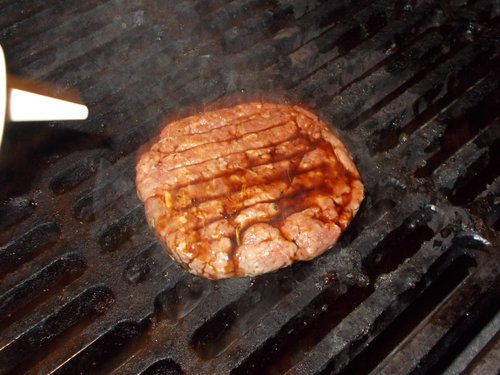 But actually – truth in cooking – Michelle pretty-much does the whole thing for me. So I can take pictures is my excuse.

“There is technique involved,” she says, as she flips mine. “With the rib eye, you want to do it medium-well, so the marbling melts. That fat gives it its great flavor. With filet mignons and sirloins, you can do it as rare as you want. Uh, you need to toast your buns now.”

OK. Not sit on da grill, but put the hamburger buns on. And the cheese slab. 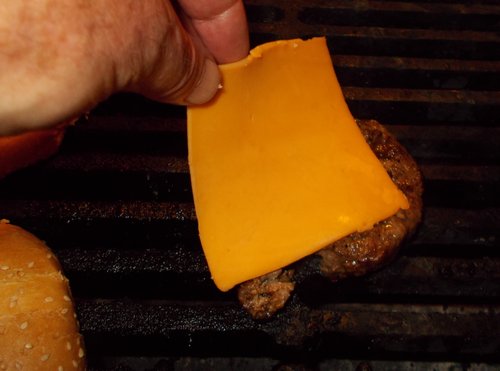 She squirts a lotta ketchup, mustard on the upturned bun... 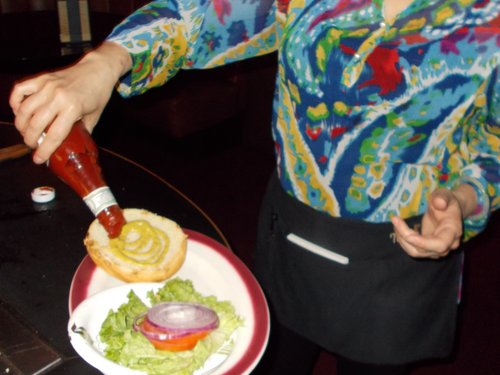 ...scoops the patty from the grill... 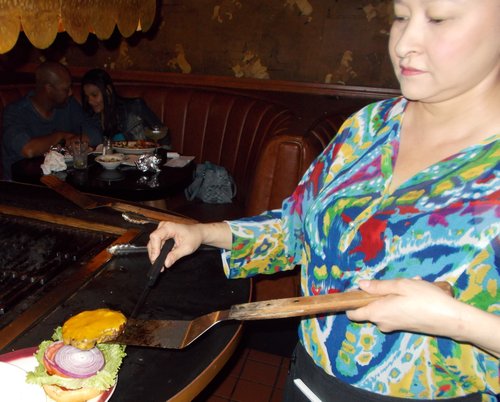 I sit down and look at it. Smell it. Ooh. Sabroso. 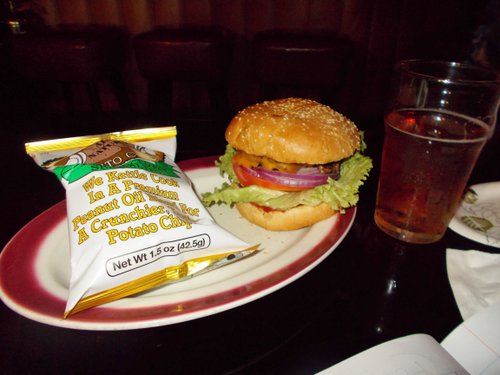 I mean this is fire, your basic element. This is men cooking the hunt. This is primitive stuff.

“Yes, men usually want to do the grilling,” Michelle says. “It’s something about those coals, the flames, the meat.”

Whatever, my grilled patty – it’s a 1/4-lb of ground round sirloin – has that nice burned taste you can’t get no other way.

I settle in, chowing down as I watch other men throw their kill on the grill.

No wonder this place has been unchanged since 1950.

This place is awesome.

You're so right, Vournsdsu. Maybe it's because you have to work for your supper, it tastes that much greater by the time you actually get your molars into the meat.

Nice story Ed. But the back story is these d-bags that run the Turf Club now, stole the concept from their former tenants who now operate the Rivera Club in La Mesa. I won't patronize thieves and a$$hole landlords so the "Turf Club" gets none of my business, none of my recommendations and I wish them the karma they deserve for being business bullies. I hope the original Turf Club owners have learned a lesson and trademark their name so they can't be screwed by the likes of the partners behind Steak Daddy, LLC. Remember when you do reviews, to interview the owners. It would be appreciated. Otherwise, review chains and let your column wilt into obscurity.

There used to be a restaurant on El Cajon Blvd, somewhere near 30th (Dookies?? Harry's?? Can't remember the name), back some 35-40 years ago where you could cook your own steaks, burgers, etc., so who actually stole this "concept" from whom??