Party 'til your belly aches at Alchemy's 4th Anniversary Bash

For a small fee, Alchemy promises booze, photos, music and a lot of food at their birthday party on Thursday.

Since opening in 2009, Alchemy has made sure their food could be described by those delicious buzzwords – sustainable, free-range, local and organic.

Never have I personally had such a glorious meat-laden meal at one restaurant, via Alchemy's Suckling Pig Dinner, then turned around the next week to eat an equally fantastic farm-to-table three-course Vegetarian Tasting dinner at the same spot.

So it really comes as no surprise that Alchemy (1503 30th Street) is going all out in celebrating four years in their South Park digs.

$10 will get you in the door to this delicious party and will include tray-passed street food morsels and access to a Taco Bar.

Their "signature street-style dishes" will be cooked lived using produce from Seeds at City Urban Farm, an organic farm/outdoor classroom/weekly market used by and for the Sustainable Urban Agriculture program at San Diego City College.

That same Hamilton will also get you a drink in the form of a glass of Cava (Spanish sparkling wine) from Segura Viudas, a Blind Tiger Cocktail Company craft cocktail or a Societe Brewing Company beer.

In fact, the folks over at Societe Brewing Company have taken over all five of Alchemy's taps for this event - and all month long, as well. 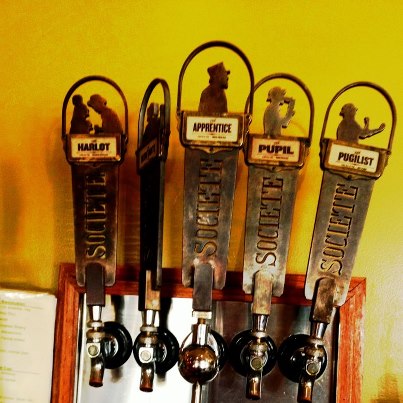 Drink specials will be flowing all night to the tune of $4 a pop.

Also mentioned were "great jams, Tapeña Wines photo booth and more", but further information about these extras was unable to be procured. 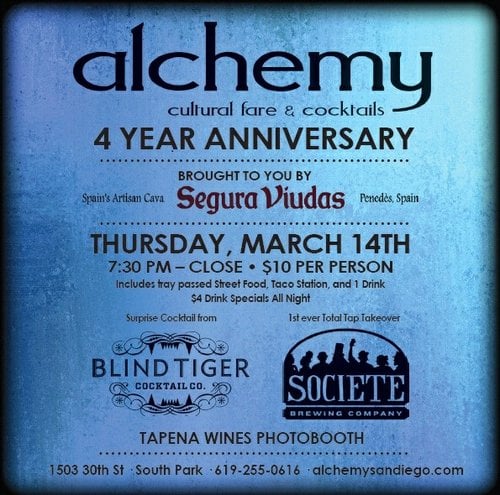