Since opening in 2007, Ritual Tavern has been known for its farm-to-table values and - like many of its sister restaurants lining North Park's 30th Street corridor - carefully selected taps and bottles of craft beers.

In response to his move at that time, Bergman had promised a menu of "reasonably-priced, beer-centric, completely handmade cuisine of the highest standard" while Ritual said they would "bring renewed focus to whole-animal cookery and organic urban gardening on site."

If you haven't been to Ritual Tavern since Bergman's takeover, Thursday, April 11 would be a great time to give the candle-lit tavern another try.

A new favorite among beer afficianados everywhere (yours truly included), San Diego-based Societe Brewing Company was founded in 2011 by Travis Smith (of Russian River Brewing Company and The Bruery) and Doug Constantiner (The Bruery).

Societe's standout character is no surprise coming from the waters of Russian River. There's a thoughtfulness there; there's something different and delightful coming out of Societe's taps.

Their focus is on IPA’s (which seems to be a must for any San Diego-based brew co.), Belgian-inspired brews, and wine barrel-aged sours.

Each of this dinner's four courses will be paired with one of Societe Brewing's beers.

The menu is as follows:

Apricot Gelato and Lemon Shortbread served with The Madame, a complex Belgian Golden Strong Ale with a 9.2% ABV (my personal favorite).

The cost for this beer-pairing dinner extravaganza is $65 per person, not including tax and gratuity. 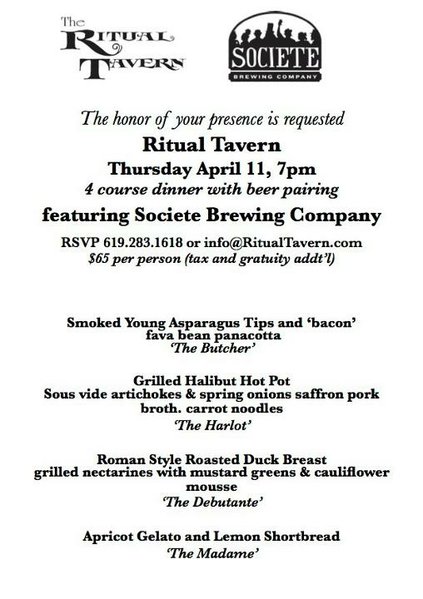