Salah learned his art in Baghdad and Damascus. Check it out as you chomp cheap

Salah Jamel learned his art in Baghdad and Damascus.

Now he’s bringing it to life in Coronado. 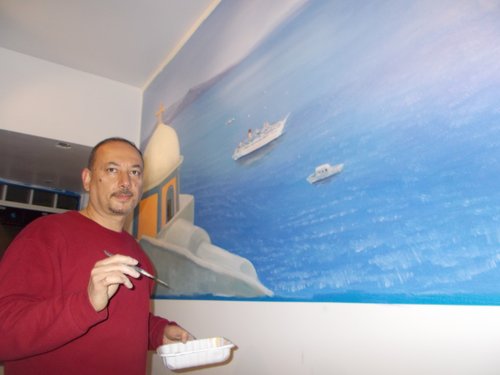 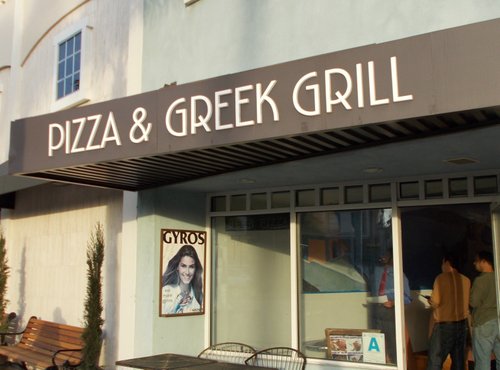 As I come in, he’s just painting his name... 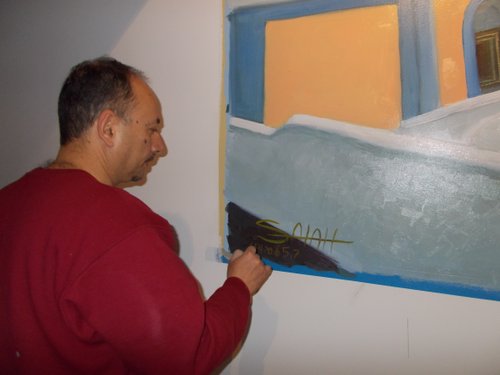 ...on the bottom-left-hand-corner of his way-big mural of Santorini. Thera. The ocean-filled crater where, they say, the fabled city of Atlantis disappeared. Talk about Big Bang theory. Whatever, there was a heckuvan explosion. 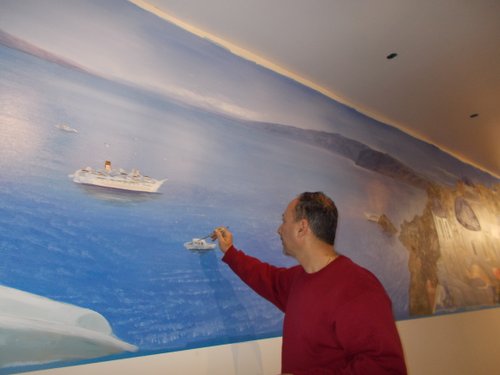 On the opposite wall, Salah has painted the same-sized mural of the Akropolis, looks like. He didn’t have much time: “It was about two, three days for each,” he says. 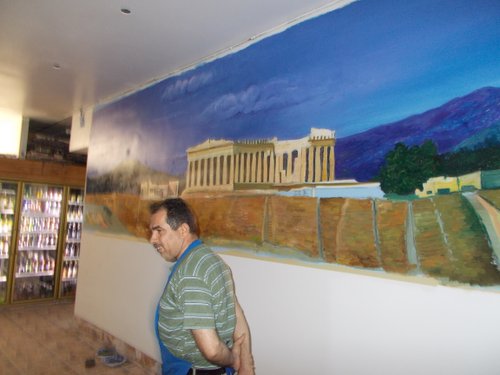 Sam the food section assistant, in front of the Greek scene

The murals stop about four feet above the floor. “That’s the height of the benches,” he says. “This will be a restaurant.”

That’s what I’ve come for.

Because even before this place changed its name from "Coronado Bottle Store" to "Pizza and Greek Grill," you could get good-value Mediterranean food here. You just had to fight your way through the racks of likker to get to the food counter at the back.

I liked their prices. Like gyro sandwiches for under $5.

But no. Today, I want a plateful. One for Carla, one for me. For here, even though now eatin's limited to just a couple of black wire mesh tables outside.

So I tramp through a long concrete wasteland... 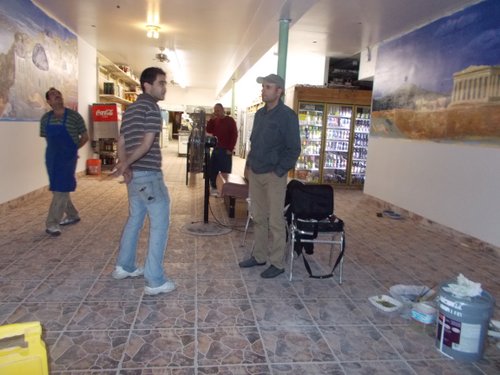 ...past brown leatherette booths stacked against the walls, waiting to be set up in the front, till I get to the kitchen counter, and Sam.

“No problem,” says Sam. “But outside. I can bring it out to you. Sorry for the mess.”

They have about ten plates going for $6.99 each, including a 1/2lb burger and fries (compare that to Burger Lounge prices across the road, $7.95, no fries). But I go for a beef and lamb gyros plate and Carla chooses the chicken souvlaki.

Kinda nice outside in the sunset, even with the construction going on inside. Sam brings the tray of plates. And hey, what you get for what you pay…so much on these plates. 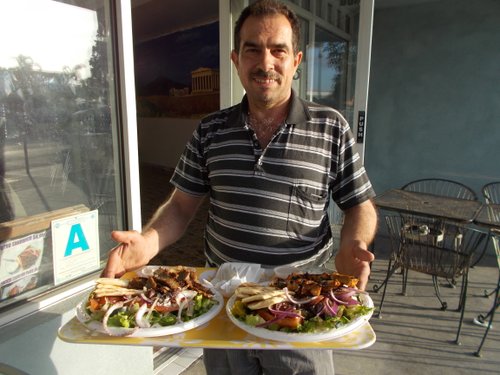 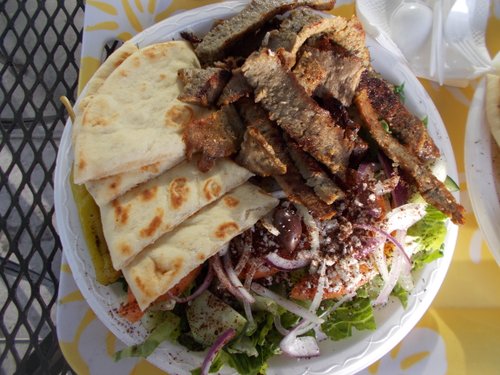 You get the taste of lamb coming through. And the chicken has that nice charred tang. 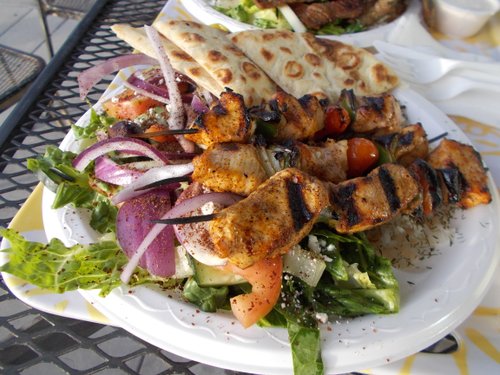 Plus tasty basmati rice underneath the meat, and the grilled bits of skewered onion and tomato and green pepper mix well with the bowl of tzatziki - cucumber - sauce you get. And you have a nice tart dressing for the olive-raw onion-tomato-lettuce salad that lies under the chicken kabobs. Four quarters of pita bread tamp down the sharpness too.

Carla the history buff says souvlakis – meat on skewers - have been around at least 4,000 years. “I’ve seen firedogs that old,” she says, "in museums."

“Andirons, the carved chunks of metal or stone. You’d lay the skewers with meat chunks and veggies, whatever, across two of them with the fire in the middle.”

I swear. What this lady don't know... But funny to think people back then were eating exactly what she's eating today.

Lordy. Full. Both of us. I keep forgetting what value you get in these Mediterranean places. The guys here are Chaldean. When Sam asks how it is, I answer with the one Aramaic word I can remember:

Sam says they should be open as the full-on café with Salah's art in its finished glory around the middle of the month.