This time, success! But is success excess? 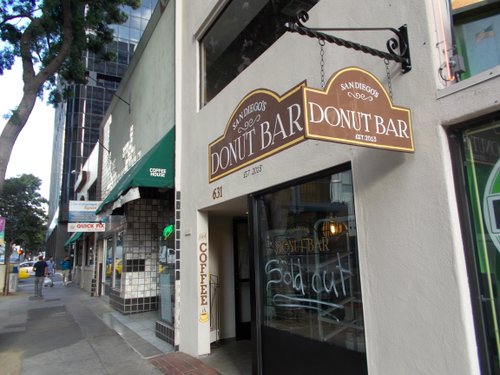 I discovered it earlier this week. Only problem: that afternoon they had totally sold out already. Seems you’ve got to get there in the morning if you want your fix.

So this morning I did, hoping to get one of their cro’bars, a donut that thinks it’s a croissant. So feathery it could just about float away, according to the owner, Santiago Campo. ’Course he is the owner. 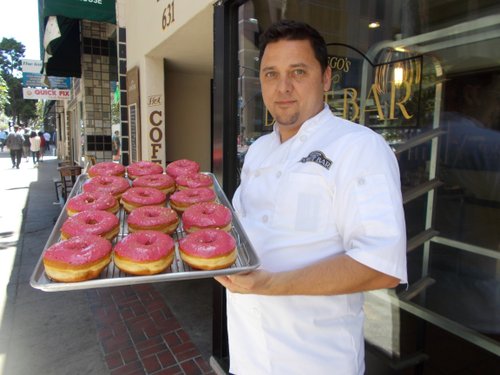 But no. Gawn already. So I settled for a raspberry pistachio and a coconut dream. 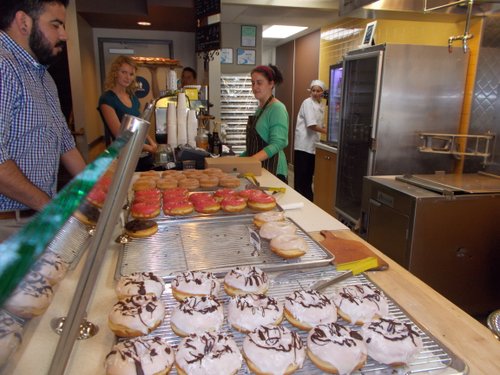 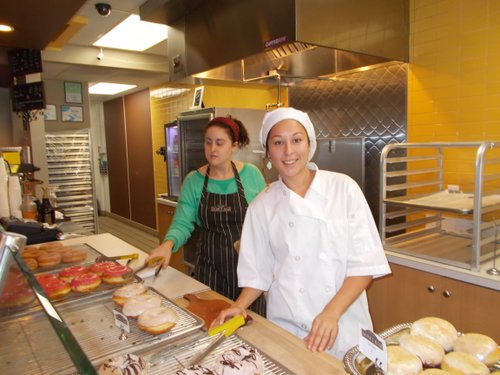 These are gourmet size donuts – 3-1/2 inches – and gourmet prices. Cost $3 each. But they do come with interesting glazes on them, like the one with Jim Beam whiskey, Vermont maple syrup, and topped with bacon. Good news is the coffee – totally essential with donuts - is only (as the menu says) a buck a cup.

I mean, honestly? I’ve never really lost my heart to donuts. Too cakey, too, doughy. Except and unless we’re talking maple and nuts. Now those I’ll walk a mile for. I think Donut Bar has maple bars for $1. Except they were out again today.

But Carla’s already in a swoon, two chews in. “These are superb,” she says. “So light. Never let the topping drown out the flavor of the donut.” 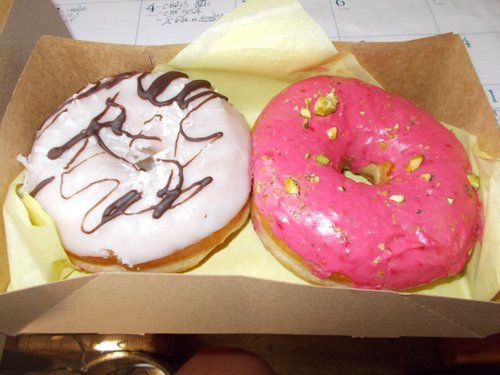 I can see this is more than taste talking. She’s thinking with each bite.

“Okay, it’s because one summer when I was nine, in Sacramento, my cousin Gaylord went to work in a donut shop,” she says. “He was seventeen. He’d tell us to come by around nine in the morning, and he’d take spatula-loads of them out of the deep fry, and give them to us kids, sizzling hot. No icing. I just loved the taste of the sweet dough. I think I was a little crazy about him too. Ever since, I can’t eat a donut without thinking of him. ”

By now she’s halfway through the coconut dream.

Must say, with cawfee, that coconut icing’s deelish. Uh, the dough? For me, dough is the price you pay to get at the icing.

I break off a piece of the raspberry pistachio. Tastes of raspberry alright, and those are actual pistachio pieces on top.

“So what happened to Gaylord?”

She stops picking at the coconut. The way she sighs I know I’ve got the kind of competition you can’t fight.

“He married a girl he worked with all summer at that same damned donut shop. They became vegetarians. Here, finish this off.”

I do. I mean, health food? No. I guess it’s okay, so long as you don’t make a daily habit of it. Plus I can’t help admire how Santiago seems to be working his tail off to make his business happen. He says he’s often there at midnight, and back at 5:00 next morning.

But the part of what he told me I liked the best was how at, like, seven each morning, when the crew who have been baking the donuts through the night are heading for home, exhausted, the newly arrived day crew line up and applaud them as they leave.

“Because they’re the most vital part of the team,” Santiago says, “and usually the least appreciated.”

You gotta ask yourself about stuff like this, is it 3X better than a donut from Golden?

They are bigger...maybe 3x bigger? And also they use quality materials, like maple. And hey, they have an upstairs now with super luxe chairs that have swing-around trays for laptop time. And Carla was oohing and aahing about the lightness of the dough. But honestly, I've never been a cakey kinda guy. Love that maple glaze every now and then. But good question. If Yum Yum does your sugar fix for a dollar...new definition of holistic?

Holy crap. I took a closer look at the picture and those donuts are way huge! I almost always go for two or three donuts (because I luuuuuurve them), but I'll wager I could get away with only one at this place.