New place sells out so quick, you've got to get there by daylight, practically

Whack? It’s written clear across the window of this new donut place I’ve run across on B Street downtown. Okay, it is in the afternoon. But not that late. 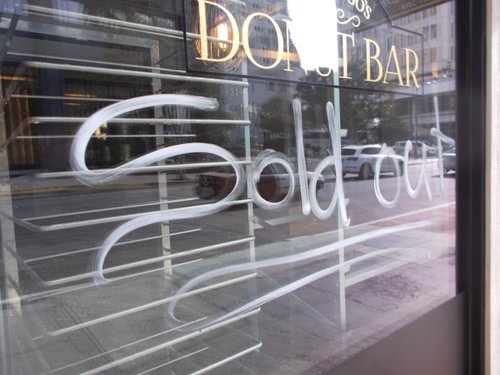 I have to go in. “We usually run out around eleven in the morning,” says this guy. Santiago Campa. “It has been crazy ever since we opened, March 28th.”

It seems these guys do gourmet donuts with far out favors like ones soaked in Jim Beam whisky, and ones that look like mini birthday cakes. “We have also mimicked a New York invention called the ‘cronut,’ says Santiago. “Croissant meets donut. Thin pastry in eight folds. It melts in your mouth.”

He says he’s from a background in hotels like the Four Seasons, but wanted to break out on his own.

He and his partner Wendy Bartels decided there was a big, uh, hole in the gourmet level of the donut market. 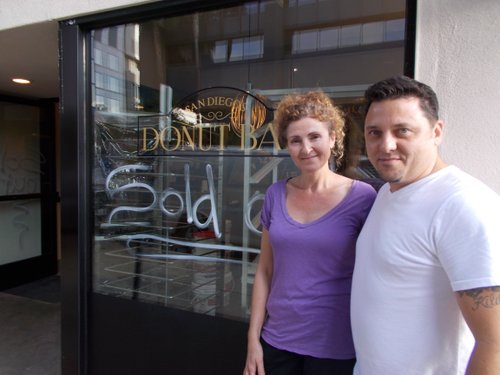 “We looked in LA, Orange County for the perfect spot. But I’m from San Diego. So one day I just got my bike and started riding around downtown and asking people. And I swear, everyone would look at me like they were totally frustrated and said “We don’t have a donut shop downtown. It sucks!’ So that’s how come we decided on this location.”

Man. I’ve got to come back. As I’m leaving, Javier Jiménez, Santiago’s partner from Seven Café around the corner comes in and starts cutting holes in pastry. 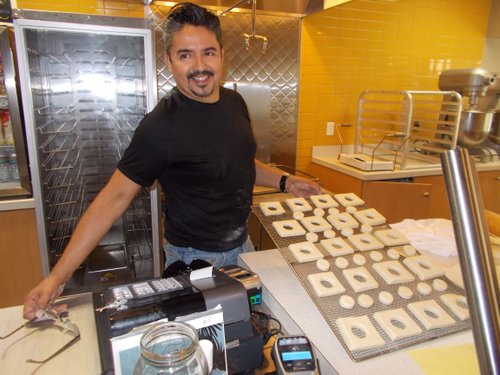 “We’re combining forces on our version of the cronut,” Santiago says. “We call it the ‘Cro’Bar.’ Honestly. You’ve got to try it.”

That and a lot of others. Guess I’ll have to come back.