Normal Heights bar opens for brunch. Neighborhood hipsters have not had to run for cover.

The Heights Tavern (3377 Adams Avenue, 619-501-3455) has has made a solid bid to stick around and become a part of Normal Heights. At first, the rabble roused themselves over the presence of a second True North opening Uptown. For a lot of people, there was this idea that Pacific Beach bro culture, and its perceived violence, would somehow invade North Park, leaving the hipsters with nowhere to park their skinny jeans and flannel shirts.

Well, that didn’t happen, not really. If anything, twenty-something sports fans have a place to call their own and there’s more room than ever for the 30-plussers to queue up at BLAH. More bars isn't always mo' betta,' but it can be.

The Tavern, scenting success, now serves brunch until 3PM on the weekends. It’s a welcome addition, if for no other reason than that Antique Row, Adams Avenue Grill, and Park House are too busy half the time and it’s a hassle to get a seat!

The patio seating pulls the most weight in Heights Tavern’s bid for brunch patrons. With plenty of sunlight and good people-watching along Adams Ave, I could only wish for more seats than the handful of four-tops lined up along the sidewalk. Lots of sports on TV is a good or bad thing, depending on your predilections. Objectively speaking, it’s hard to find a better spot in the neighborhood on a nice day. 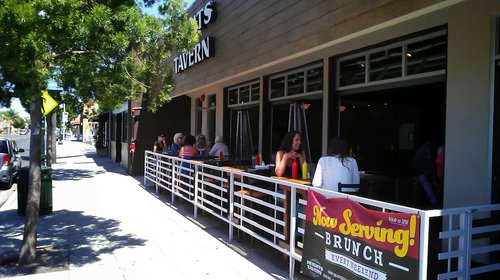 Watch the world go by from Heights Tavern's patio. It's pretty good!

As for the food, the kitchen at Heights has kept on an upwards trend since I first went there. Successive visits have shown improvement and the patty melt ($10.50) at brunch was on the better side of average. The burger remained succulent and the gently caramelized onions had a heady sweetness to them. The runny yolk of the fried egg turned the entire sandwich into a saucy mess, but that’s to be expected from a good patty melt!

I saw plenty of other nice looking dishes go out: some generous salads, benedicts, waffles, french toasts, and the like; nothing adventurous. Heights Tavern is not that kind of place. Like I said, the kitchen is a perfectly dependable average. You will be neither thrilled nor disappointed. The only thing that disappointed me was a lack of sugary coffee drinks. I’m all for Mimosas and Bloody Marys, but I also want a hot cup of decent coffee with my brunch. Always. Other than that, I left full of food and soaked with sun.