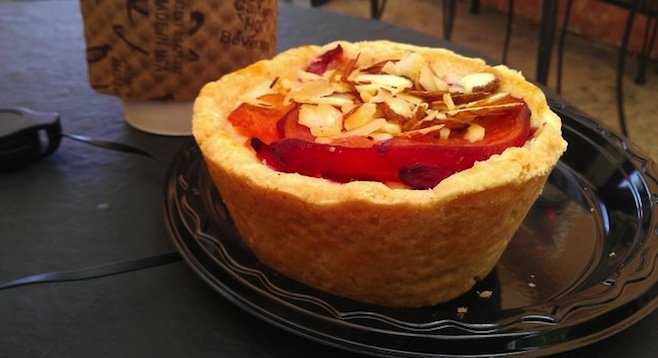 A word to the wise: the name of Normal Height’s new “Broke Girls Coffee Bar” (3562 Adams Avenue, 619-546-8302) abbreviates to BGCB as a play on the former New York City nightclub (CBGB), not the fashion design group (BCBG)! I know, I know. All those B’s, C’s, and G’s can get confusing, but rest assured that the owners have deeper sentimentalities for punk rock than the red carpet. That’s not to say the place can’t be cute...dare I say, adorable? Between the pink signage, cozy coffee bar, and the extensively shaded patio seating, Broke Girls is downright fetching! 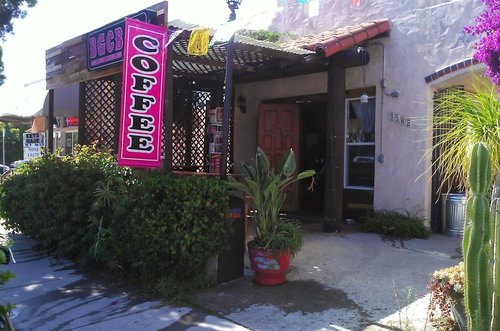 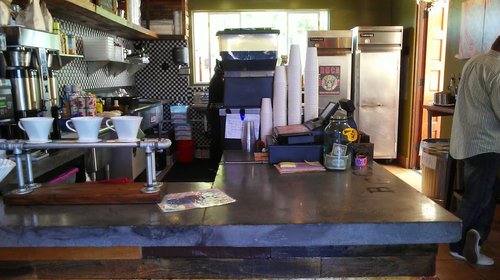 I gathered they have a suitably punk rock DIY attitude about everything, but the overall effect is quite pro. Despite being open for just over a month, it’s a homey, welcoming shop. No doubt a lot of hard work went into making it that way. Blazing fast WiFi, which gave me no grief over signing in on the sometimes-recalcitrant computer, made the spot good for sitting and getting some work done on a nice day. Were the weather chilly, Broke Girls could prove drafty by virtue of design, so it’s probably a better place for sunny days.

The coffee, while not quite on par with the snooty coffee-as-art-form places, was better than average. I got spoiled for choice looking at the menu, which offered all the best cups (pour-over, cold brew, espresso, etc.) for serious coffee without any of the triple-mocha-chunky-creamsicle drinks that make my pancreas recoil in horror and my heart beat 30% faster.

Best of all were the little pies. I had this personalized peaches and cream confection that impressed me with a delicate, slightly sweet crust and a texturally satisfying interior. This isn’t quite the next-generation gourmet pie shop that I’m (still) waiting for, but it was definitely a step in the right direction. Good to see somebody giving pie it’s rightful place atop the pastry pantheon.

It also looks like Broke Girls brings in a lot of musicians for shows. This weekend, they have two separate acts lined up for Saturday, which further augments the fact that BGCB is a better destination hangout spot than a mobile office for the freelance crowd. All that fresh breeze may not be good for work and study, but it’s rad for chilling on the patio and hearing some sweet new jams.