Savory crepes and a good patio make for a winning combo in the Uptown District center.

Bino’s Bistro & Creperie (1260 University Avenue, 619-688-1674) has opened in the Uptown District shopping center. The Eurofying remodel shed light on the formerly cavelike buidling, once home to a Thai restaurant, and the sun now reaches to the buildings depths. Generic--but nonetheless pleasant--cafe music pipes out over the patio and the effect has been transformative, making Bino’s look much more like a desireable lunch destination. 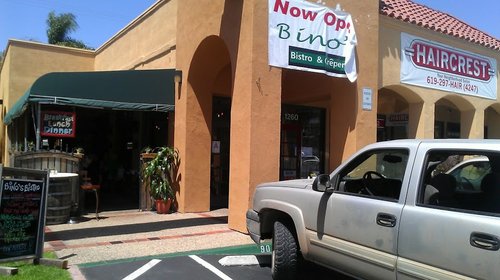 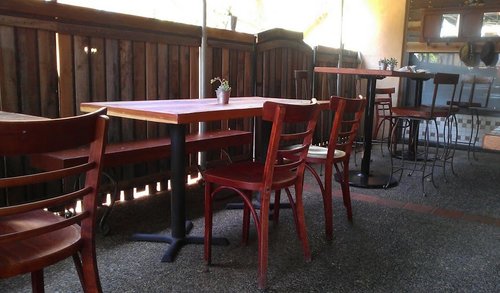 With fresh pastry, pretty good coffee, an 8 AM opening, and ample parking, Bino’s could be a solid destination for leisurely breakfasts. Starbucks will probably continue to dominate the coffee and muffins crowd, but this new place is worth a look.

For me, it’s all about the crepes ($8-$11). In my typically famished state, I ordered up a Croque Madam. It had ham folded up inside, a fried egg on top, and a smothering of bechamel sauce; a pancake version of the iconic French sandwich and very likeable. 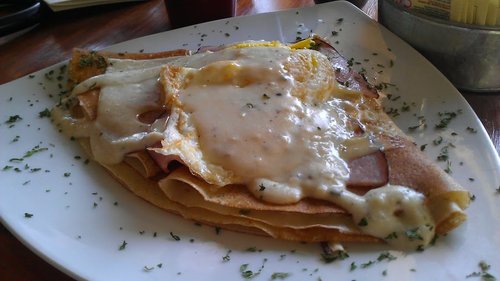 Afterwards, I let the appetite loose on a dessert crepe loaded with poached apples, raisins, nuts, caramel sauce, and whipped cream. The whipped cream came from a can, which is always a disappointment, but the rest of the stuff atop the crepe was perfectly credible and I ended up sated and happy.

Crepes are neither difficult nor classy, but they sure are fun, comforting, and filling. In spirit, I suppose they are little more than burritos with Parisian aspirations, but for me they have an entirely different feel, inspiring leisure and contemplation. Maybe it’s just because I need a fork to eat them.

Bino’s also does some sandwiches, most of which are versions of the various crepes served between bread. The menu indicates that a beer and wine license is incoming (with a little luck and time) and that the restaurant plans to expand into dinner service. The genial owner (seriously, in between slapping me around some and joking with me) told me that dinners were already being served Thursday through Sunday, when the place stays open until nine. Other days, they close at four. I will probably wait until the wine menu comes out to inspect the dinner service, but for now there’s no doubt that Bino’s is a small victory for the crepe elite.