This week I headed out to Normal Heights for Tasty Tuesday at Smitty’s Auto on 3441 Adams Ave for their weekly food truck gathering. After circling the neighborhood I found parking a few blocks away. On the brisk walk I ran into Stacey Dent leaving Lestats. Dent is a 33-year-old Chicagoan visiting San Diego. 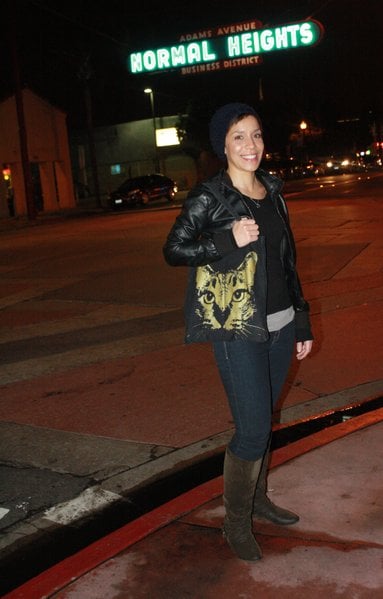 “I’m disappointed that it’s cold,” She said of the cold snap we’ve been having.

Dent’s favorite thing about San Diego are the fish tacos and all the outdoor acitivities.

“I went for a jog this morning and the hills are really intimidating.”

Stacey is a self-proclaimed bargain shopper, ‘I think it’s unfortunate when people spend too much on fashion.”

Stacey Wore a Forever 21 faux leather jacket that cost $20, Gap Jeans bought on sale for $12.99, a $20 H&M shirt and $7 beanie. Her canvas cat tote was scored in the lost and found at her work, Hubbard Street Dance, where she works as an Accounting director. Dent wore $50 boots by Blowfish from DSW. 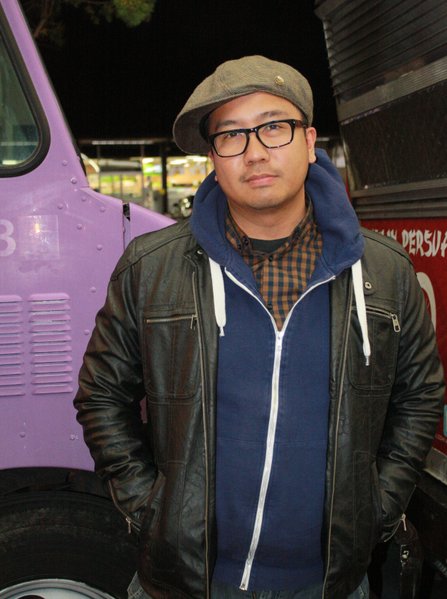 30 minutes later, after I scarfed down a smores sandwich for the Devilicious Food Truck, I found Chris Lalas, also sporting a leather jacket. His is by Marc Ecko and was purchased at Macy’s. The 30-year-old works in loss prevention. “I catch shoplifters for a living,” he said. Both his sweatshirt and button down are from H&M. He purchased his hat in San Francisco.