I’ve watched, hawk-like and keen-eyed, as Dark Horse Coffee postponed opening over and over and over again. Normal Height’s new roastery was supposed to open in October of last year, but delays in construction and inspection (part and parcel of converting a building for food service usage) pushed the opening back into the new year and beyond. The shop languished unfinished, seemingly for an age, but the doors are finally open and pour-overs happenevery day.

It looks good in there, too. The construction definitely emphasized a vintage/rustic look, but they took the time to finish everything rather than just leaving it ratty and calling it artsy. The building, next to the Adams Avenue post office, is tiny, but there are a few stools and some table space along the walls. Still, I wouldn’t count on a seat there during busy hours! 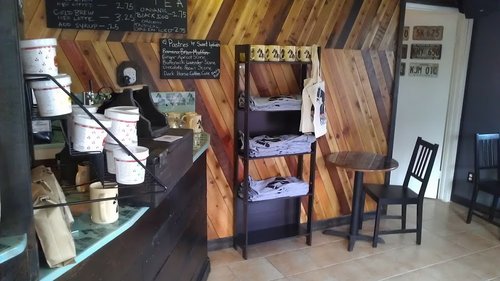 As of now, Dark Horse is roasting three different kinds of coffee to showcase different beans and regions of origin. I had a pour-over of Papua New Guinea-grown beans ($2.50) and found it delicious. Already, Dark Horse is ahead of most other coffee places in terms of flavor and complexity. Only the Collective outstrips them at this point and I expect a healthy market for upscale, uptown coffee to spring up between the two of them in the coming year.