New fish joint brings its own legend to Horton Plaza

At last: hope for the corner of 4th and Broadway.

I was there Friday night around six, and the corner with the dark brick building looked different…

You could see people eating. Through the window, at tables, a big island bar, a crowd of yuppie types, and a sign.

Uh, didn’t this use to be a Payless shoe store?

Whatever, it’s refreshing to have a bright welcome to Horton Plaza, even while the big demolitions are going on across the road.

I head inside to the bar section. It’s buzzing with the end-of-week post-work crowd. Bit worried about costs here. They all look kinda prosperous.

And I see dishes like “Port Townsend Seafood Simmer,” which sounds delicious, with scallops, clams, mussels, shrimp, fish all in there, but, uh $25.

Then I see the little stand-up menu on the counter. The saving words.

“Spike’s favorite hour,” it says. Turns out Spike Africa was one of the legendary trading schooner captains of the Pacific. This fish place kinda memorializes him. 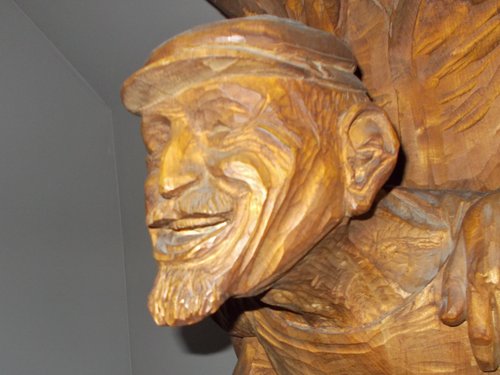 So drink deals, of course, but also food. “Fresh shucked oysters, $1 each,” it says, right up top.

“A shuck for a buck,” says this guy surrounded by lots of women and lots of food. Kevin. Lawyer. Been a fan since this place opened three weeks ago. “Hey, that’s good,” he says. “Buck a shuck!”

Then the menu says you get half off all appetizers, in the “Under Way” section of the menu.

Now Kristin, behind the counter, is waiting for an order, and other customers are clamoring. 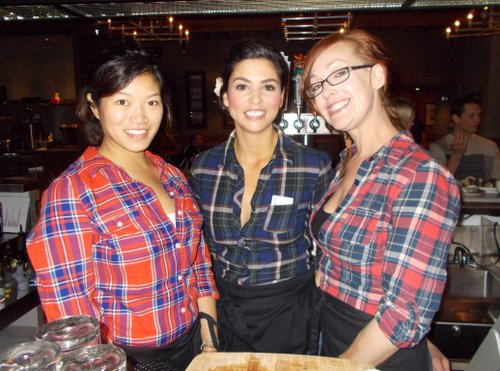 I go for the a mug of clam chowder ($3 in happy hour), a “seaside oyster roast,” which is a “Rockefeller-style” mess of oysters and lots of other stuff, for $6, oh and that live buck-a-shuck oyster ($1), too.

For starters, that oyster... 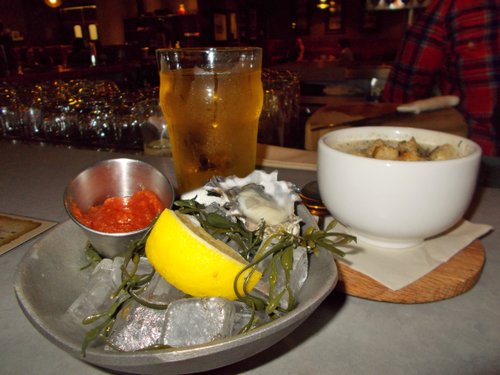 ... I have a choice of a Fanny Bay oyster from British Columbia, or a Kumai, from Baja. Smaller but tastier, says Kristin. I go for size, Fanny Bay. Big, lush, and with a spritz of lemon and red cocktail sauce, delish. 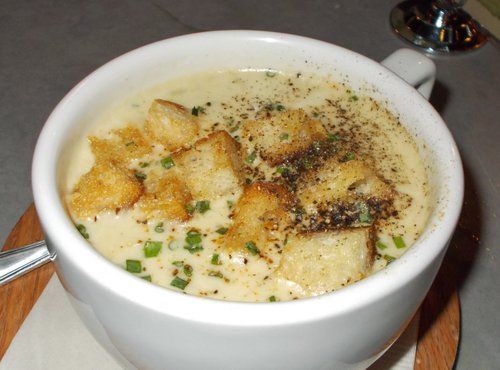 ...man, it’s a meal in itself. “Clams, king crab, scallions, Fanny Bay oysters, celery, onion, croutons, and heavy cream,” says Kristin. “No wheat or roux. So it’s not gloopy and glutinous like most chowders you get.”

Really, it’s one of the best I can remember. And filling.

But when the oyster roast turns up… 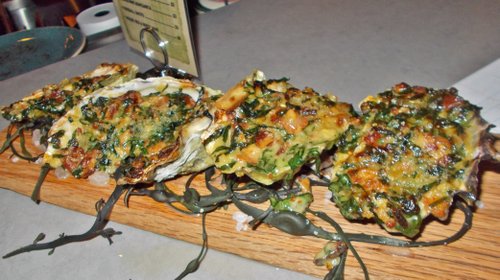 Totally scrumbulicious. And for everything... 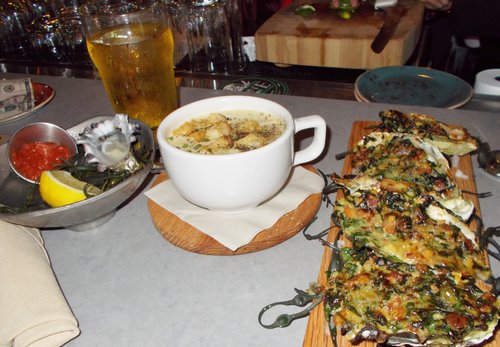 Plus, I come outa there bloated. Couldn’t even finish my Bud Light.

Luckily, the bus stop’s only half a block away.

Bottom line, gotta come again, try other dishes. I’ll report back. ’Cause, hey, have we mentioned who Spike Africa was? Apart from President of the Pacific…?