North Park bar may just have the best deal on a steak dinner, but it's only one night a week.

I don’t know how I missed out on steak night at Gilly’s, living right around the block and all, but Tuesday now has a new old hotness. I guess they’ve been doing it for a quarter-century--grilling up steaks for the regulars at the bar--but this is the first I’d heard of it. Gilly’s had been a weekend karaoke joint in my eyes and, since I don’t sing karaoke, low on my list of priorities. Now, it’s climbed much higher in my estimation.

The deal is simple, Samurai Steve grills on the patio and steak dinners start at $10. There’s no law against bringing the steak back inside the bar, but I liked the open air dining aspect of the patio on a coolish evening. The crowd that shows up for steak night looked like they’ve been coming for years, and the two guys serving up the steak seemed to know most people’s names. 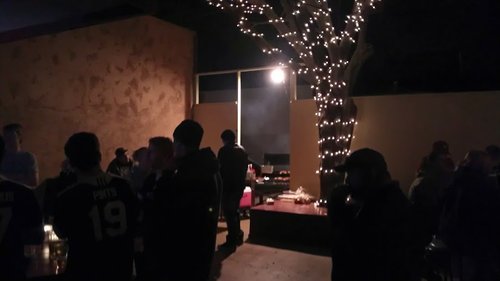 My $10 got me a sirloin, some salad dressed with Steve’s housemade dressing, and a baked potato with sour cream. The meal came on a styrofoam plate and I topped my own steak with a pat of butter. I could have added a shrimp skewer for a few dollars more, but I was feeling like a purist.

There was a hint of A-1 sauce about the meat, that unmistakable tamarind/raisin/anchovy tang must have been part of a marinating process, and Steve delivered my steak pretty darn rare as requested. The experience lacked both elegance and pretense. It just was what it was; peeps hanging out in a bar and eating steak. Totally rad. They even had t-shirts for sale.

Steak night starts at 6PM every Tuesday at Gilly’s (2306 El Cajon Boulevard) and runs until 9 or the steak is gone.

In North County, specifically Carlsbad, there is a legendary place called Tip Top Meats. It is a German deli plus restaurant. You can pick any sort of steak right from the deli case and they will cook it for $2 more and throw in the sides. But you can also take advantage of one of their specials. One of the best deals I have seen on steak is their $9.99 Steak and Stein. You get a BIG steak plus soup/salad + potatos + a draft beer for that price. Ive never seen a better deal in SD anywhere.

I agree. This place is spectacular in the value and quality of their meat. The owner's "Big John" Haedrich, a retired champion wrestler I think who escaped from East Germany. He certainly knows his meats, and is a master sausage maker (he comes from a family of sausage makers). Haven't been there recently, but I'm pretty sure $10 will buy you a great sized steak. But for North Park what you had sounds a great deal too.

Wow! I rarely get up to Carlsbad (although I do have a few places on the list of "to eat at" up there) but I will try to get into Tip Top if/when I am in Carlsbad with hunger and time to satisfy it.