Downtown: Night at the Opera (okay, outside)

Food to make you sing at Aida

I’m in the Civic Concourse. Someone’s just switched on the bow-wave fountain of the ship sculpture. Sun’s setting. 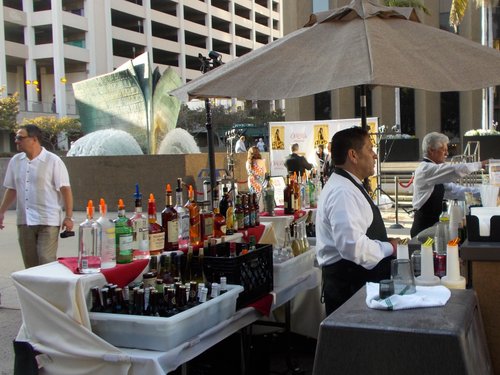 What's new is a bunch of other people have set up tents around the Civic Theater (1200 3rd Avenue, downtown).

Drinks counter, champagne only $10 by the glass… 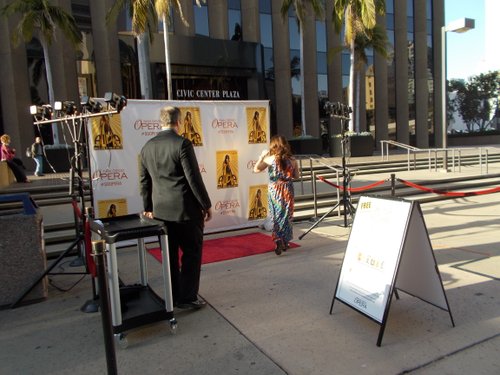 Aha. Turns out it’s the last night of San Diego Opera's Aida. Designed by Zandra Rhodes. Carla raves about her. God. Loved to have seen that. Besides, buddy of mine, Ernie, is actually singing in this danged thing.

So outside is this cluster of tents. Food, drink, desserts. 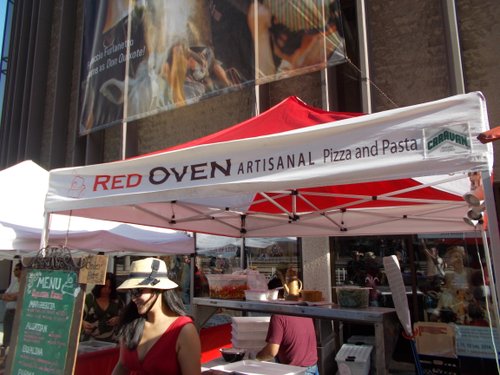 His oven even has a log of wood burning inside... 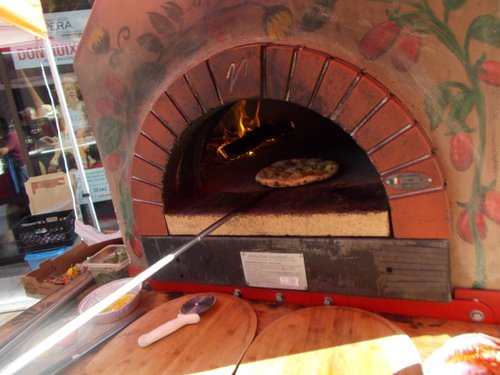 He has a sample lasagna sitting out on the table. Makes me instantly hongry… 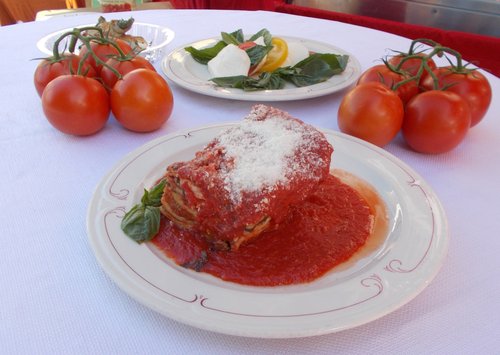 But at one of the lux-clothed tables they’ve set up, this lady, Sharman is standing waiting for her friend Gloria to turn up. They’re season ticketholders. She’s gotten herself a crêpe in the meantime. Looks totally delicious. The crêpe-making lady she got it from is part of La Crêperie, which has permanent quarters up in North Park (3773 30th Street, Suite C, 619-795-0407). 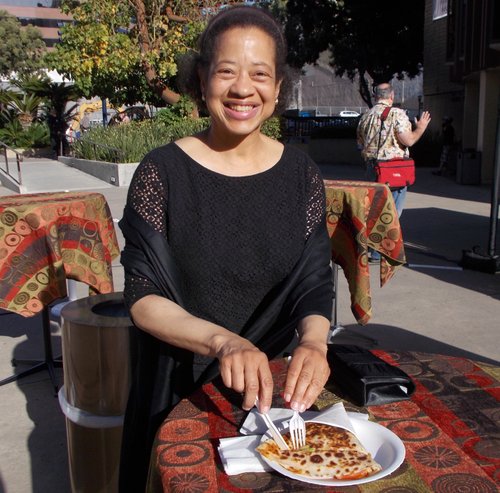 “It’s a ‘Green Hen,’” Sharman says. “It has chicken breast, avocado, tomato and cheese. Lovely. Usually the line to the crêpe tent is too long. Tonight I was able to get mine straight away.” 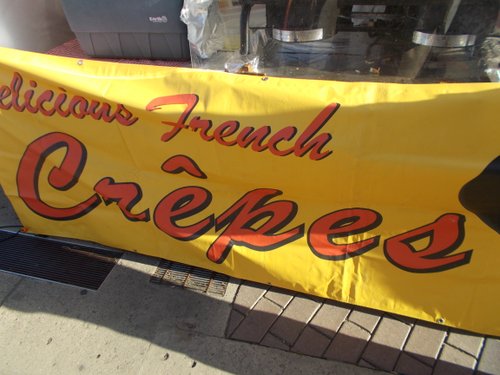 Little line of opera-goers ahead of me, but the gal, Désirée, has lightning hands. It’s not long before she’s winding on the crepe mix, chopping up the chicken... 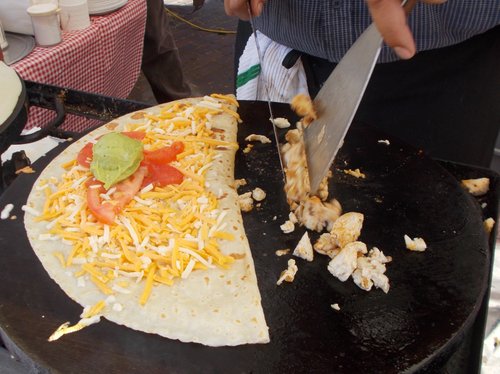 ...adding a scoop of avocado, and a couple of sauces. One’s harisssa, a Tunisian-French spicey sauce. Other’s a garlic squirt. 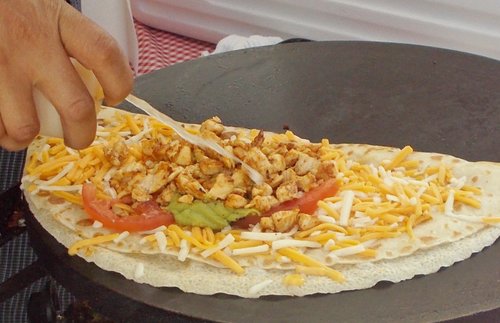 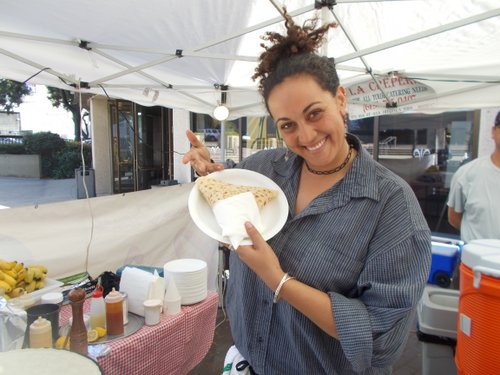 Turns out Désirée’s a totally fascinating woman. Half the time she’s speaking French to her buddy behind the counter, and she says she’s doing this job to make funds for the school she started in…Haiti.

She learned French when she was at the Conservatoire of Music in Paris, also teaches piano…Lord. makes my life feel totally boring.

But now she’s flapping my crêpe into a fat triangle and moving on to the next customer.

I take it to a table, take a chomp and, oh yes. The garlic, the heat, the gunge of the guac.

Whatever, now I can’t resist checking the tent next door. Lady with a counter of beautiful chocolates you’d nervously nibble on while Aida belts out an aria heading into the pyramid, whatever. I mean, they have all kinds of decorations on them that make you think of wall-art more than something to feed your face with. 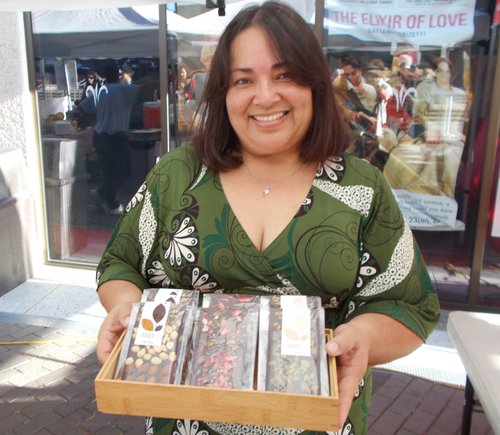 ...says she makes them all herself up in Oceanside. 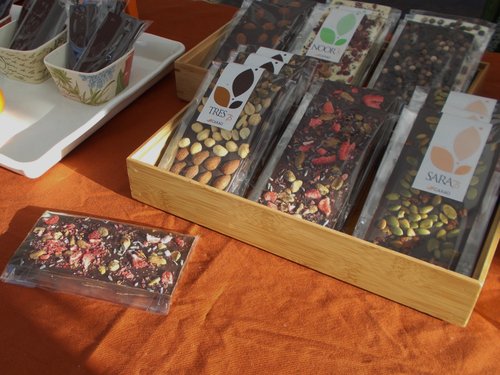 I ask her about one up front that looks like it has bits of pink flowers, nuts, blue and white mini-petals on top.

“That’s the Sofia,” she says. “It has pistachios, strawberries, rose petals, lavender, and the chocolate is 75 percent cacao, from Ecuador.”

The Sofia’s $10. I know I shouldn’t, but I buy it. For Carla. Haven’t gotten her anything classy for, well, ever.

Back at the ranch, magic. “I can’t believe you’d get something actually nice for me,” Carla coos. She breaks me off a chunk.

You can smell the flowers, specially the lavender, before you even bite in. The herby tastes of rose petals, the rich, tart chocolate, just knowing you’re eating stuff like Cortez probably ate - and drank - with Moctezuma.

All in all, quite a haul.

Heck, who needs an opera, when you’ve got such a show going on outside? 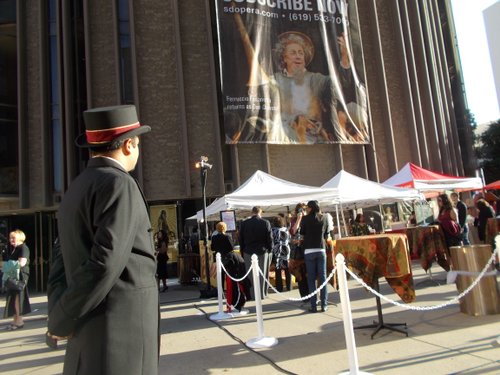 Finally! I had that chocolate one night at Bacchus downtown, never could remember who it was by and I've been wanting to try Red Oven for ages now. Thanks!

Amoril: You're welcome. And yes the choc is terrific, with the little dried flower garden on top. So great people like Beatriz have the guts to start up something like this. And I'm desperate to find out more about Red Oven's crazy "Have oven, will travel" idea too.