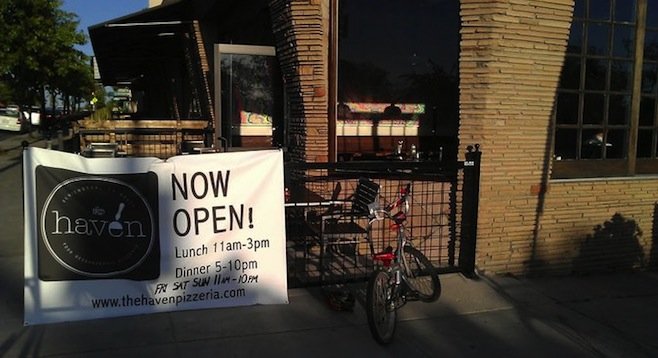 The Haven open in Kensington

After achieving success in waffles and happy hours, the Kensington Cafe’s ownership has opened the Haven just down the block. It’s a little confusing, since the Haven looks for all the world like it’s part of the Kensington Grill, being conjoined and all, but the two businesses are provably separate.

Chic decor and a prime location on Adams Avenue provide the Haven its biggest assets. The wide-open dining room overlooked by a huge, rainbowed piece of modern art is filled with good seats from the back of the restaurant to the patio. It’s much like the Cafe in that the Haven is a perfect place to sit and do a little people-watching along the chillest stretch of Adams.

Pizza (available in 9- or 15-inch sizes), salads, small plates, beer, and wine compose the menu, leaving little in the way of protein-heavy meals of substance. Someone in the kitchen must be fond of hazelnuts, as the cobs and filberts appear atop a dish of roasted sprouts ($7.99) and in the pesto that tops some of the pizzas. That’s not a bad thing.

There were no hazelnuts in my antipasto salad, only olives, grated mozzarella, onions, pepperoncini, salami, and a light vinaigrette with meticulously balanced acidity.

I tried the “total package” pizza ($9.99/$15.99) topped with onions, mozzarella, Brussels sprouts, and a beguiling garlic sauce of inexact composition but undeniably sweet richness. Chewy dough formed the base of the pizza, which was rolled thin enough that it had to cool some before I could heft a slice upwards. Along the spectrum of pie, Haven’s wasn’t so spare as Blind Lady’s, being more conventionally thick and cheesy. Truth be told, there was something of the blistered crust and tender center indicative of Neopolitan pizza in the style of Pizzeria Bruno, although the final product was a kind of consolation between the two. 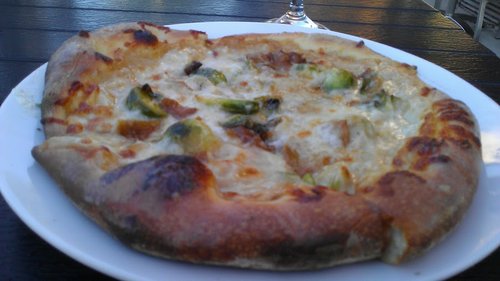 Those disinclined to order the ready-made pizza can build their own with 20+ toppings, six sauces, five cheese, and three crust options (including a gluten-free version for a $3 upcharge).