A while back, Ed Bedford wrote about the pizzas at Caffe Calabria in North Park. I’m always on the lookout for new places for a slice, and the pictures of the thin crust and fresh toppings seemed right up my alley.

I like just about any kind of pizza. Chicago-style is what I grew up on, so of course it holds a special place in my heart, but New York style, Neapolitan, Sicilian - I love it all. Well, I don’t do pineapple or barbequed chicken, but if that’s your thing, I’m not going to judge you. Just leave the pineapple off my side of the pie. 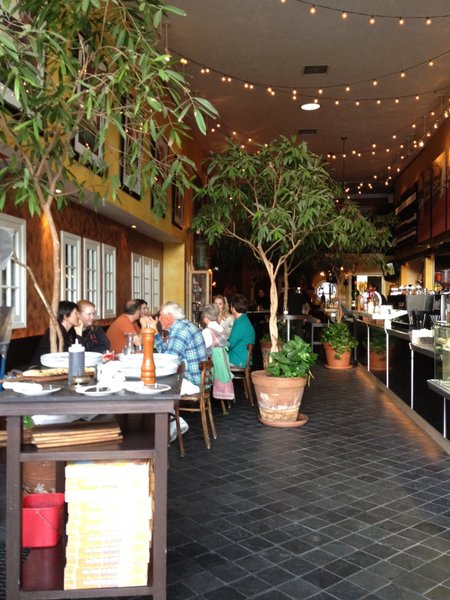 The place is pretty as all heck inside. It reminded me of some of the pizza places I’ve been to in Buenos Aires, a city that, despite its geography, honestly believes it's European. They make some darn fine pizza there, too.

The pizza oven is a grand thing, beautifully tiled and hot as the soles of Lucifer’s shoes. They go through a ton of wood keeping it that way.

Caffe Calabria’s pizza is Neapolitan style. According to the rules set forth by the Associazione Vera Pizza Napoletana, this means the dough consists of wheat flour (type 0 or 00, or a mixture of both), natural Neapolitan yeast or brewer's yeast, salt and water. The dough is mixed by hand or by a slow speed machine, and, after rising, must be shaped by hand, without the use of a rolling pin or other implement, to a thickness of 3 millimeters. It is then baked for 60-90 seconds in a 905 degrees F (485 degrees C) oak wood-fired oven. Those crazy Italians. 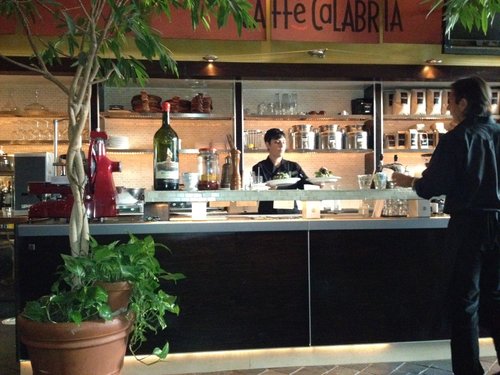 Our meticulously made insalatas verde.

We ordered a couple of insalatas verde ($5) and a Salsiccia pizze ($14). Our table was directly across from the prep area, so we watched the sous chef carefully make our salads. I do mean carefully – she tossed delicately, then shaped and reshaped them until she was satisfied that they were perfect (at one point putting them back into the mixing bowl, reapportioning and reshaping). Nice to see someone who takes that much care in her work, especially with something as typically pedestrian as a green salad. 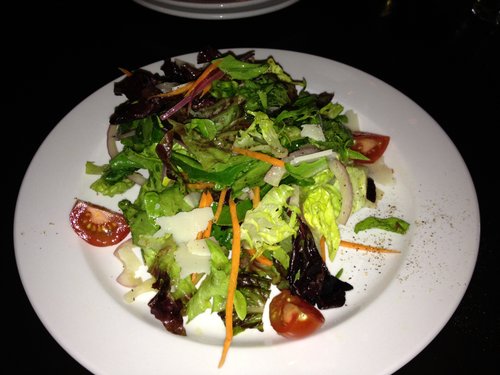 It was a very good salad, too. The vinaigrette had excellent, fruity olive oil and not too much red wine vinegar. Soft baby greens were mixed with fennel, carrot, tomato, red onion and a bit of grana padano. 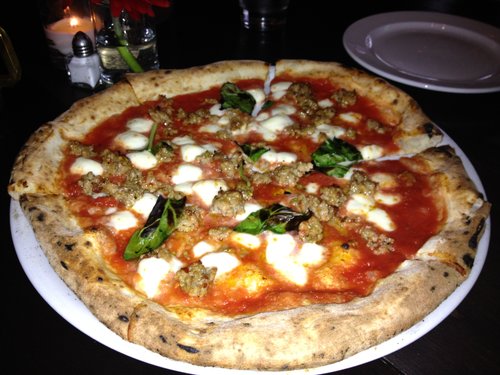 One of the problems with Neapolitan style pizza is that Americans like their pies with loads of toppings, but the soft, thin crust isn’t meant to support tons of ingredients. A fork was necessary for the first couple of bites before I could pick the slice up. What delicious, fresh tasting bites they were, spicy sausage, creamy, milky cheese, and slightly tangy sauce. There’s nothing like San Marzanos for sauce. At first I thought that there might be too much, but no, it was just right. We managed to put away the entire pie. I regretted that the next morning when I didn’t have any leftovers.

On the way out, we bought coffee beans, Calabria Espresso ($16.60/lb.), which almost, but not quite, made up for the lack of breakfast pizza.

Need to know: They only make pizza Wednesday through Sunday from 5:00 - 11:00 pm, so plan accordingly.

Caffe Calabria is located at 3933 30th Street in North Park.