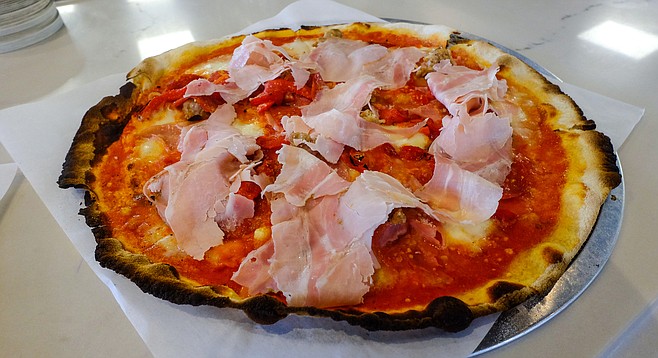 Pizza crust doesn't get any thinner

And this pie named after a movie villain is killer

Catching up for a quick lunch with a friend, I found myself back at the Little Italy Food Hall, scanning its several restaurant counters for something we can agree on. As often happens in such a situation, we settled on pizza.

That would be Ambrogio15, a Pacific Beach eatery that expanded over here with its Milan-inspired, organic flour pizzas, baked in a red dome pizza oven. Whereas American-style pizza spots would struggle to produce a “quick lunch,” Ambrogio’s pies take little time to cook, because their crusts are exceedingly thin.

The term thin crust doesn’t do them justice. These things have all the thickness of a water cracker. The closest I’ve seen to a pizza crust this thin was a Oaxacan tlayuda, sometimes called a Mexican pizza, where cheese is melted over a baked-to-crispness flour tortilla. Between a tortilla and Ambrogio pizza crust, it would take a high precision caliper to figure out which is thinner.

Which makes it all the more perplexing Ambrogio had trouble cutting the pies into slices. The first attempt cut through the cheese and toppings, but only scored the crust itself. It wasn’t sliced-through enough to tear off a slice without mangling the crust and toppings, so after attempting to saw through a slice with a plastic butter knife provided by the food counter, I brought the whole pizza back for another run with the pizza slicer.

The problem was, Ambrogio’s slicing and serving their pies on metal mesh trays, so their cutter wheels can’t make consistent contact with a hard surface beneath the charred at the edges crust.

A minor logistical issue. Once attained, the slices of pizza were tasty, A Margherita starts at $13, with upgrade options including whole wheat or gluten free crust, various oils, olives, and Italian cured meats.

For a few dollars more you can get the really good stuff: the sweetness of genuine San Marzano tomato sauce or a 20-month-aged prosciutto. We went for both of these, served standard on the Hannibal Lecter pizza, which features a two-year-aged parmesan, spicy salami, grilled red pepper, porchetta, and Italian sausage.

When you see how the prosciutto is splayed out across the top of the pie after it comes out of the oven, the cheeky Hannibal reference becomes clear. The pink meat shavings tossed over the top of the pizza vaguely resemble the flaps of skin worn by the cannibal killer of Silence of the Lambs.

Despite the comparison, the sight of it won’t ruin your appetite: the pizza tastes too good for that. In fact, you might want to order a second. These $13-18 pies are designed for quality over quantity. One pie could almost satiate two light eaters. My friend and I are not light eaters and made quick work of two.

People have a tendency of describing Chicago pizza as either deep dish or stuffed. Not true! Father & Son Pizzeria baked a wafer thin pie that guaranteed a crunch in every bite. One of the first places I hit up when I moved to town in 2000 was a joint called Uno's. They claimed to serve Chicago-style pizza. It was toast topped with ketchup and yellow cheese. One bite and in the garbage it went. This looks much more to my liking, particularly the charred crust. And I can practically smell it through the WiFi. Thanks for the tip, Ian!