Berkeley Pizza in the Gaslamp has the right crust.

I will shamelessly admit that every time I go to the Little Italy Mercato, I snag a sample of Berkeley Pizza. They are there every Saturday morning, selling take and bake pies and giving out bites to taste. There’s always a line, and they usually sell out fairly quickly.

They also have a dine-in shop on Island Avenue, between Fifth and Sixth, a tiny, cozy place where you can grab a slice and a beer, or go whole hog and order a custom pizza. A quick caveat, each whole pizza is made to order, and they are thick, so it takes about an hour to put together and bake. Better to call ahead. 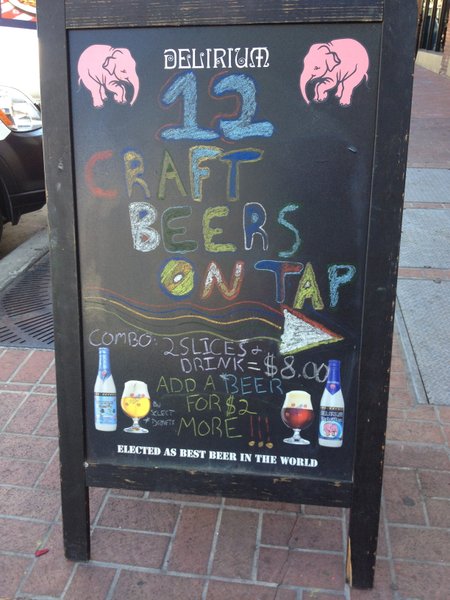 They also have a pretty darn good special – two slices and a drink for $8, or a beer for $10, dine in only. 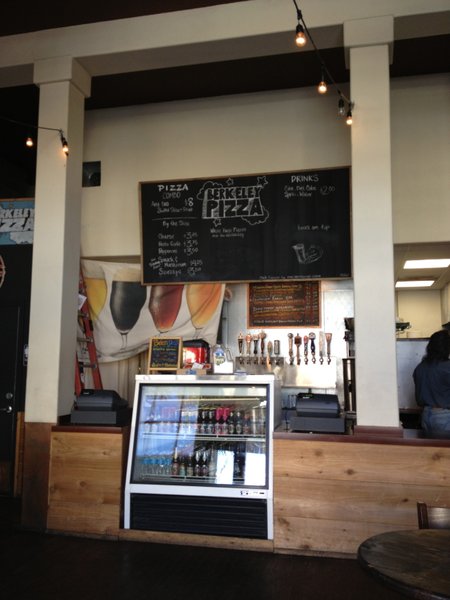 I like ordering slices of Chicago pizza rather than a whole pie because I think it tastes better that way. Sort of like when a roast chicken sits and rests for a while, the flavors seem to blend a bit. Also, it’s quicker, meaning I burn my mouth less often on screaming hot cheese because I’m too hungry to wait another second.

Today, I went with a pepperoni and a spinach mushroom, their signature pie, while John got sausage and pesto garlic. There’s a small but good selection of beer on tap to choose from. 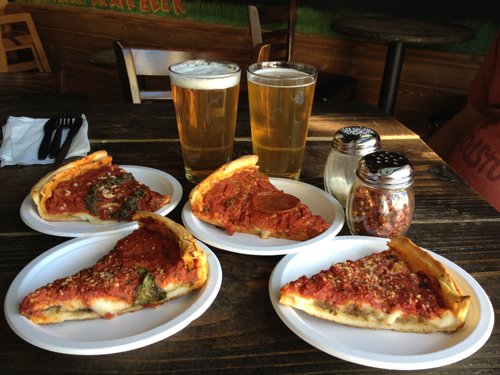 Berkeley’s Chicago deep dish gets its thickness from fillings, sauce and cheese, rather than a fluffy, bready crust. It leans a bit in the pastry crust direction instead, crispy and buttery. Sliced mozzarella is layered directly on the crust, then go on the toppings, more cheese, and finally the sauce and a shower of parmesan. Occasionally the order changes slightly, like most places they put the pepperoni on top of the sauce so that it crisps and browns. A deviation I’m fully in favor of, because who doesn’t love it when the pepperoni is nice and crunchy?

I’d like to pretend that I was dainty and used the knife and fork provided, but I wasn’t. I just picked it up and munched away. Great crust, gooey melted mozzarella, fresh, quality toppings and a bright, tangy-sweet, herby sauce. No leftovers.

Berkeley Pizza also has take out, and delivers to downtown and a few adjacent areas.

Mary Beth, this place sounds great! I can't wait to try it. I have yet to find a pizza place in SD that truly resembles the Chicago style pizza I grew up on.