Hillcrest to receive a combo butcher shop and speakeasy

There’s a real sausage fest coming to Hillcrest. Sorry, had to go there when I heard about Salt & Cleaver (3805 Fifth Avenue, Hillcrest), a venue devoted to house-made meat-in-tube-form scheduled to open this month, likely by April 15. All poor opening line choices aside, it sounds like a nice concept. Keep in mind that I’m usually cynical about most new spots I hear about that are devoted to mega-focused menus made up of signature items that are low in cost to produce but easy to charge exorbitant prices for due to their “artisanal” nature and the fact they’re en vogue.

So, what makes Salt & Cleaver different? Rather than opening a cookie-cutter venue that could just as easily play home to a wine bar as a pizzeria or constructing a meager storefront with as much class and comfort as a McDonald's, the owners of this business are moving forward with a rather fun concept, going for an old butcher shop "speakeasy." It’ll be the type of place where, much like an underground gin joint, guests are encouraged to sit a spell and take their time over the specialty of the house. And, oh yeah, there’ll be craft beer, too. I'd be lying if I didn't 'fess up to that detail's influential power. 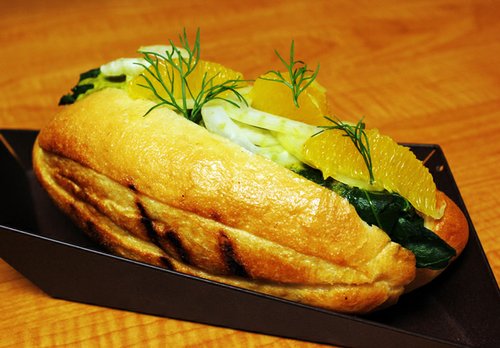 "The Faceless," a vegetarian item filled with quinoa, asparagus, peppers and cauliflower; wrapped in cauliflower greens and topped with citrus slaw and herb aioli

It’s a simple idea, but one that’s easy to get behind, especially since the ingredients used to craft the sausages, which will be designed to convey flavor combinations from around the world, will be procured from nearby sources. Offerings will include the “Pork Belly” with lemongrass-ginger relish, Sambal vinaigrette and China rose radish sprouts, and “Duck.Duck.Pig”—a duck and bacon sausage with crispy duck confit, bacon-aze and orange marmalade. Duck a l’orange with bacon. Um, yes, please!

Salt & Cleaver will also serve a lobster sausage with garlic pepper and shrimp remoulade, a jalapeño- and green chili-stuffed rabbit sausage, and their vegetarian option made from brown rice and eggplant that’s wrapped in a cauliflower leaf. Now, I’ll admit, that last one doesn’t get me salivating, but it’s inventive and none of the above qualify as more of the same old stuff I find on other meaty menus. That’s a victory in itself, and worth both a trip and a try.