I live nowhere near Bird Rock and, though I think it’s a nice little community, it takes a lot for me to venture to that non-freeway-accessible, roundabout-slowed part of town. But one place inspires me to do it time and time again—Beaumont’s (5662 La Jolla Boulevard. Bird Rock). It’s a simple yet colorful eatery filled with locals and regulars clinking cocktail glasses while creating the type of relaxed, genial atmosphere that can only be found at a neighborhood spot. Every time I’m there, I wish I had a place just like it in my community. But clearly I don’t, so excursions to Bird Rock are necessary.

For years, the place trucked on with only the most minor of changes, but the last year has been a monumental one for Beaumont’s. They remodeled the restaurant’s interior and brought on a new chef. It’s pretty exciting stuff, but considering I liked it just fine the way it was, I couldn’t help but be concerned that the new version might rank below the original. Last month, I made my most recent trek to Bird Rock to sample an array of dishes from current exec chef George Morris and left happy that the same mood still exists in that cozy resto along with a tasty menu comingling Beaumont’s mainstays with Morris’ refined gourmet originals. 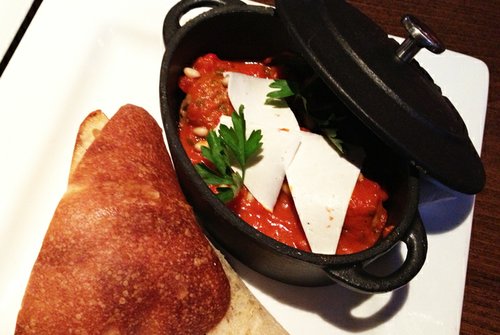 Stars off the starter menu include tender lamb meatballs served in a miniature cast-iron Dutch oven surrounded by a zesty tomato sauce I used slices of toasted ciabatta to sop up when I ran out of protein. Mint and ricotta salata round the dish out nicely much in the way fried Fresno and shishito peppers, and lemon slices lift what would otherwise be just another plate of fried calamari. Morris’ squid is next level. Ditto mussels swimming in a garlicky, slightly spicy, cream-thickened, Pabst Blue Ribbon-based broth that punctuates the importance of a nice side of toasted bread. 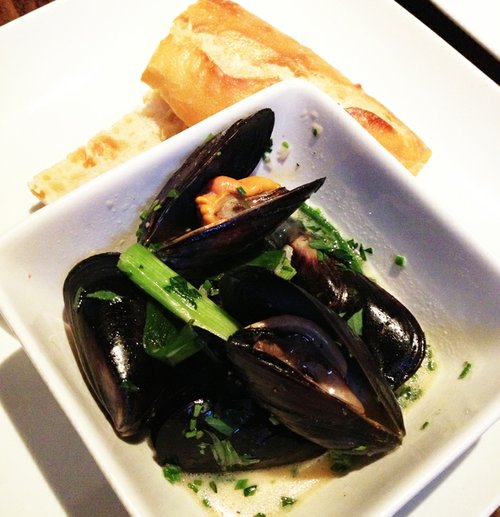 Morris may be doing chicken greater justice than anybody in San Diego. He serves an entrée that includes a plump, juicy roasted breast; nicely fried leg; and smoked wing; along with goat cheese mashed potatoes and a bacon gastrique. So many flavors on one plate, all delicious. Smoked chicken work with Grana Padano cheese and a generous dollop of whipped Cognac cream to make for an extremely flavorful wild mushroom risotto. On the seafood side, day boat scallops are deeply caramelized and served with a sinus-clearing horseradish and potato concoction plus earthy asparagus and an English pea purée. 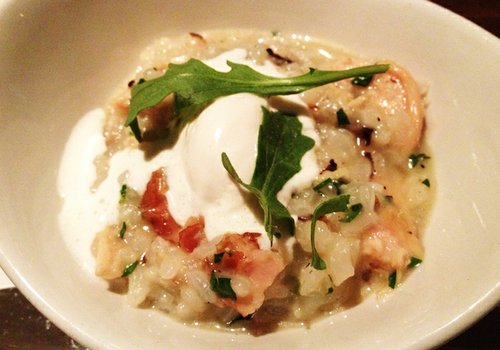 While most everything I tasted was a slam dunk, I was a little confounded by the sweetness of a bacon jam atop a hearty filet of sea bass. It took the dish over and took it to unfamiliar flavor territory for me. As much as I love bacon, a smoky pork condiment would have tasted better. Holding the pork would have been perfectly acceptable as well given the tastiness of an accompanying, naturally sweet Jerusalem artichoke puree and romanesco florets. 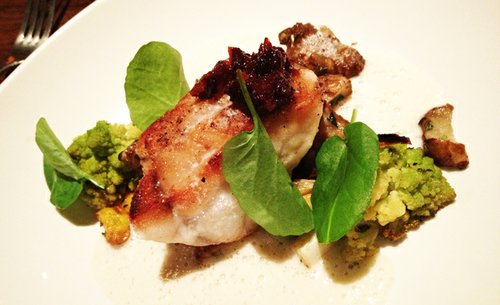 Then there was the dish I was most excited to try and wanted desperately to love—the Duckwich. A dish Morris created on the fly to feed a coworker, it's a panini stuffed with pineapple-chipotle barbecue duck breast, brûléed slices of banana, red onion, cilantro, and molten brie cheese. Duck is one of my favorite proteins, so I couldn't wait to dig in. Unfortunately, despite all of the ingredients, the Duckwich is a bit one note. I couldn’t pick up any pineapple or chipotle spice and even the bananas were a little lost in the equation. The brie, while gooey and tasty, didn’t sync up with the duck, something that isn’t often matched with cheese for a reason. Still, it’s fun and sells pretty well. I say lose the bananas, add in more pineapple and chipotle, put in queso fresco in place of the brie, and this could be a thing of legend.

As it is, Duckwich or not, there’s plenty on Beaumont’s revised menu to coax me from my inland North County digs for a night of leisurely indulgence in Bird Rock.