Located near the beginning of Orange, soon after that broad avenue peels away from the Strand, Island Pasta in Coronado is a humble Italian-American styled pasta house just a stone's throw from the luxury of the Hotel Del Coronado. Crown City isn't the most rambunctious place and Island Pasta's corner is particularly peaceful on any given night. It capitalizes on that quietude with some lovely seats on the patio for taking in the evening air, a glass of wine, and a bowl of the restaurant's handmade pasta.

While the menu offers some entrees and pizzas to round things out, it's really dedicated to pasta dishes of varying complexity. Expect to pay as little as $8 for a bowl of pasta with one of the house sauces, or as much as $14 for something like lobster ravioli and other, more substantial dishes. Island Pasta deserves credit for preparing their own pasta, as there is no task more time consuming in the history of restaurant prep. Because of this, it seems like the simple dishes that highlight the pasta itself (rather than what's served with it) are most in keeping with the restaurant's strength.

The restaurant's pasta selection included spaghetti, the smaller spaghettini, fettuccine, rigatoni, and shells; each of which could be dressed with pesto, marinara, meat sauce, oil and garlic, or with creamy alfredo sauce that's almost always too rich for my blood. The meat sauce was very satisfying, although anything but subtle. It was rich, thick, and laced with meat and mushrooms. In similar fashion, the pesto was a bold explosion of green basil and raw garlic that left little to the imagination, but also satisfied to the extreme. The pasta had the texture of a fresh egg noodle, which is a little bit softer than dried pasta ever is, though still toothsome and able to stand on it's own as a flavorful ingredient. Superfluous, but no less delicious, slices of bread tucked in at the edge of each bowl could have been provided with butter but were of good enough quality that they didn't expressly need it. 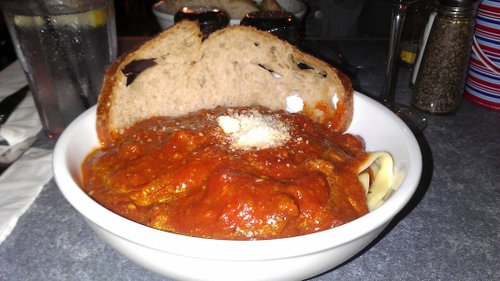 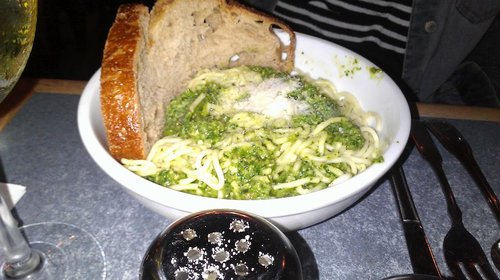 Competent, gracious service and $5-$7 glasses of, admittedly unremarkable, wine combine with Island Pasta's unsophisticated fare to create a spot that's ideal for a quick bite to eat. The restaurant's best virtues are in simplicity and frugality and it delivers on both those points with aplomb. Spending much more than $15 per person on food and drinks could lead to disappointment, but keeping it simple and will do just the opposite.