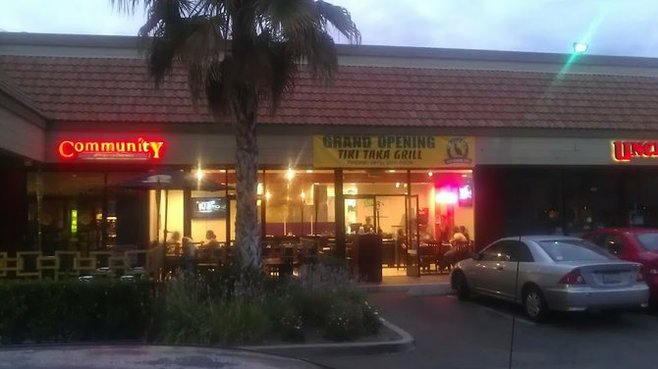 Tiki Taka: nothing to do with Mai Tais

I'll go out on a limb and venture that few people were heartbroken when Porkyland closed in Hillcrest. One less, not particularly outstanding taco shop just doesn't register on people's radars. The Tiki Taka Grill, which has opened up in the mini-mall that was home to the old Porkyland, has at least made a name for itself with one group. The restaurant, which serves Israeli-style Middle Eastern food, has been hosting members of the local Israeli-American community on the regular.

People are coming, in large part, for the "laffa," a pita bread topped with sumac and sesame seeds that's wildly popular as a street food in Israel. The bread, blistered in the center and chewy at the edges, is a big part of the table at Tiki Taka. Every guest gets some with little bowls of tahini, cabbage, and relish to top it off as an appetizer. It's extremely chewy and supple, a perfect bread for soaking up sauces or grabbing errant bits of food with. 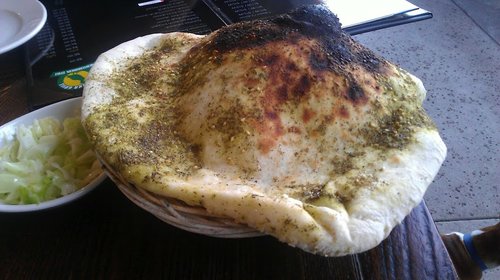 They put sandwiches on laffa at Tiki Taka, for a dollar more than a regular pita. Sandwiches can be as humble as hummus on laffa ($5.99) or a decadent rib-eye sandwich ($13.99). Even a simple falafel on laffa ($7.99) makes a filling meal. 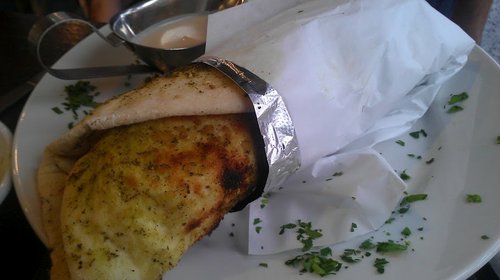 One of the best uses for Tiki Taka's laffa is the appetizer plate of assorted salads. It only costs $5.99 if it's ordered in addition to a main dish and the price rises to $9.99 if it's an entree in itself. Ten to twelve of the house's prepared salads come out of the kitchen, each arranged in its own little bowl, and a serving of hot laffa to go along with everything. Everything with eggplant is excellent, buttery and rich like the aubergine is at its best. Chopped chicken liver studded with bits of hard-boiled egg is intoxicating on the laffa and a Turkish salad of roasted red peppers is a perfect base for tabouli, tapenade, or a simple preparation of spiced cherry tomatoes. 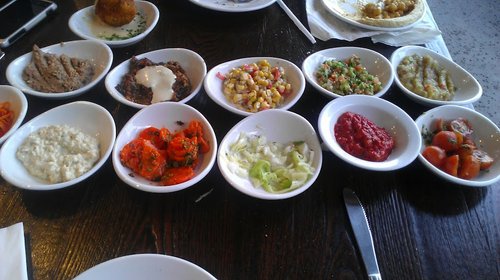 More substantial entrees from the grill are served with a substantial side dish. The Israeli salad (cucumbers, tomatoes, herbs, peppers, and onions) is a refreshing option alongside a hearty protein, but truly ambitious eaters might go for mashed potatoes or fries. Dishes can be as extravagant as filet mignon or lamb chops, which is frankly a pleasant surprise to see on Tiki Taka's menu, or more "street food" style like chicken livers and hearts on a skewer. Shnitzel leaps out as another surprise. The cutlet is breaded and fried, but served with ketchup instead of capers and lemon in the German fashion. 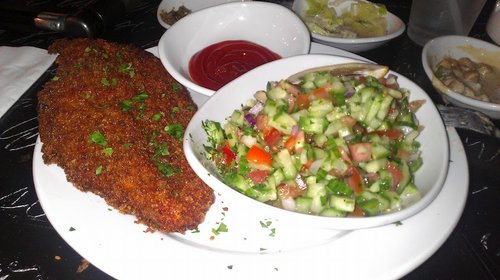 Smaller portions of selected dishes are available during lunch (10-3) for under $10.

TIki Taka serves no alcohol, but the mint tea is quite refreshing and very suited to the food.

At first glance, Tiki Taka has the look of a take-out joint, perhaps a place to grab a quick falafel. It's higher-than normal prices might seem scary in that situtation, but the reality is that Tiki Taka is an under-decorated, but nicer than expected, restaurant worthy of a good look.