How many times have I passed by Au Revoir bistro in Hillcrest? Always, I thought, "I should stop in there sometime." But I had this impression, and I don't know where it came from, that I would be in for salads and panini with accordion music in the background. Usually, I'm a pretty good judge of restaurants at a glance, but I was incorrect about Au Revoir. Fortunately, the only consequence was being temporarily denied good, simple, French food.

The restaurant's design tries, perhaps a little too hard, to evoke a Parisian bistro. The effect is more "French-looking" than anything else, and it's that aspect that possibly dulled my enthusiasm in the beginning. The burgundy-painted walls, iron chairs, and selective brickwork area are all very well done, however, so the atmosphere isn't cheesy. A bit heavy-handed, perhaps, but not without quality. I found the bar to be unsuitable for the long-legged but the tables were commodious.

Being just a neighborhood bistro, Au Revoir's wine selection doesn't delve into grand vintages and exclusive estates, but the bottles (mostly between $30 and $60) and glasses (mostly under $10) were largely French and suited the menu well.

The food was ideal bistro fare. Inauspicious dishes like mussels ($16.50) and fries or beef burgundy ($17.95) which can deliver a lot of delight despite their relatively simple dishes. The most executive dish on the menu was a tenderloin of beef ($21.95), but even that was a modest affair, served grilled with fingerling potatoes and green beans as side dishes.

Steak tartare is irresistible to me, and Au Revoir's ($9.95) was a generous portion of chopped beef bound together with minced capers, onions, lots of fresh herbs, and a touch of mustard. Served with toasted slices of baguette and the yolk from a quail egg, it was almost a meal in itself. 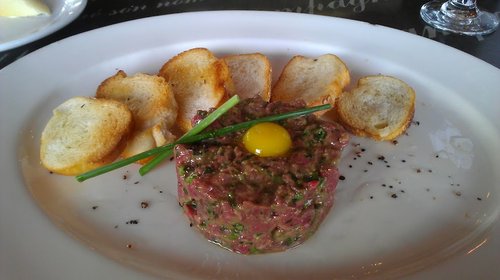 Tempted as I was by duck confit, which is a personal favorite, I opted instead for a daily special of duck breast with a blueberry sauce ($18.95). Equal to the tartare in terms of generosity, the duck had been seared and cooked medium. Medium-rare would have been preferable and in keeping with the dish's description. The meat sat atop a bed of wilted spinach and had been smothered in a rich, brown sauce studded with blueberries. The dish of fries on the side were exceptionally crisp, hot, and very salty. Opposite that, a small portion of caramelized carrots had a degree of flavor and texture not common to the normally banal vegetable. 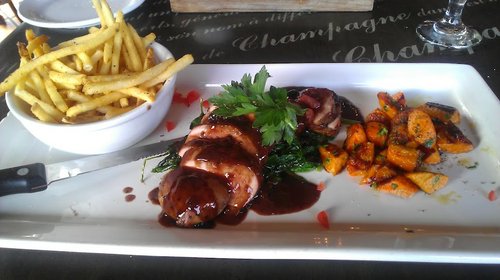 For next time, steak and fries with garlic butter looked like a great bargain at $16.50 and lobster risotto with saffron and confit shallot could be great if the subtle taste of lobster illuminates the creamy rice in just the right way.

Au Revoir's food is neither subtle nor fussy. This is a good thing. French, or French-style, bistros ideally strike a magical balance between affordability and quality; simple meals, served well, that satisfy the body and soul. It seems like that equation fits the bill at Au Revoir, the windows proclaim something like, "cuisine bonne et simple" and I tend to agree.