There is this idea in business called the 80/20 rule. It has many permutations, but one of the most common ones that's thrown about in the restaurant business is that "eighty percent of your sales come from twenty percent of your products." That may sound a little trite, but imagine, for example, how many sausages get sold at the Linkery, or the number of fish tacos and California burritos that most taco shops sell, despite the numerous other items on the menu.

Forkly, one of the newest entries into social dining applications, is making a bid to capitalize on that aspect of restaurant's menus. Rather than providing user-generated capsule reviews of entire restaurants, Forkly's application allows user to rate individual items on a sliding scale, which generates what the company is calling a DishScore. Taken as a whole, the collective ratings of multiple users produce a kind of profile for the restaurant. In theory, dishes that garner a high rating would stand out as "must haves" at any given place. 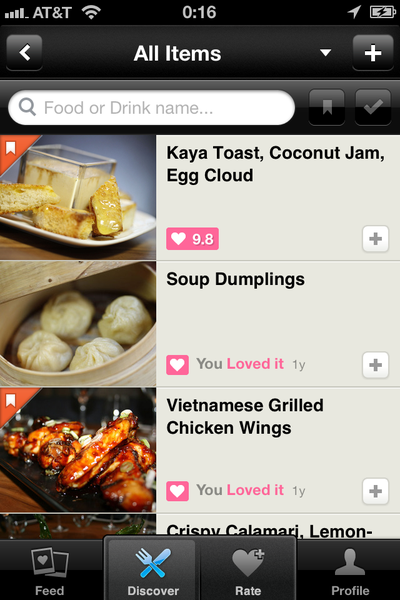 That profile doesn't take into account things like service, ambiance, location, et. al., although it's likely that those mitigating factors will figure into the background and subconsciously affect diners impressions of a dish. That is to say that, while Forkly doesn't have a button for "it's too dark in here," the fact that someone couldn't see her shrimp and grits might lower her impression of the dish regardless of its flavor.

Instagram fans will no doubt love the photography aspect of Forkly, as the application includes built-in filters to boost or modify images taken in poor lighting conditions with the inadequate lenses of phone cameras. The application ties in to other media like Pinterest, Facebook, or Twitter, and it readily integrates with personal blogs. People have been tweeting pictures of their food for years, so there's no reason an application built for that very purpose won't find a niche. 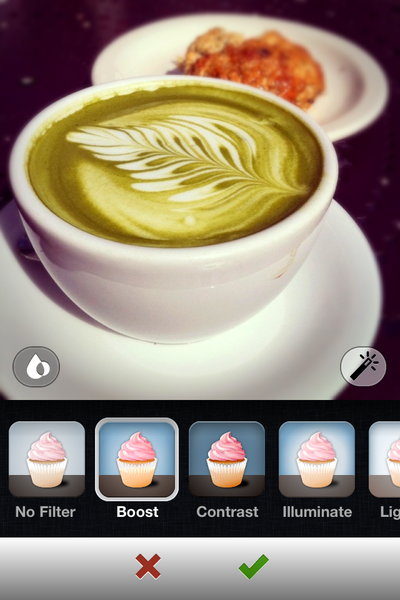 Sample of an image being prepared for a Forkly user's profile

For savvy users who don't live and die by one application, Forkly could provide a lot of insight into the local scene. In many ways, it's a digitized version of word of mouth recommendations, which have always been held in the highest esteem. This won't be a comprehensive source for consumers, however, but it will put another navigational tool in the toolbox. Forkly is thus far available for iPhone only, though an Android app is in the works.

The only problem with the formula would be behind-the-scenes profiteering that compromises the validity of the application's content. Currently, local restaurants haven't been approached by Forkly for direct marketing opportunities. Even big dollar ventures, like the Consortium and Cohn restaurants or Snooze (which has a presence in several states), haven't been approached by Forkly with prospects of improving their ratings online. The company does plan to encourage restaurant participation by offering data metrics that provide market analysis based on user feedback, but so far it seems that there's been no pressure exerted on San Diego area restaurants to buy into a system of preferential treatment. That critique has been leveled against Yelp too many times to count and has undermined the credibility of the online review service in many people's eyes. After all, of what value is a consumer-driven database if the consumers' date is ultimately manipulated behind the scenes? There's a valid argument for that being actively harmful to the industry and consumers alike.

Brady Becker, Forkly co-founder, says that Forkly was designed to circumvent the system of "damage control" that has become endemic in the small business world. As Forkly's rating system is based on degrees of positive feedback, without providing an opportunity for disgruntled customers to get on a soapbox and slander a restaurant, Brady feels confident that restaurants won't be spending time and money trying to manage their reputations online. The goal then being that they can utilize Forkly as a tool to communicate with their customer base and spend their time doing what they should be doing: making better food.

Becker also agrees that Forkly will function in a narrow fashion, but that it will perform that function much better than a general purpose application. The programs in Forkly track personal preferences, mix those with input from friends, and generate a user-profile that should help people find more of the stuff they like. That's all it does, but it will attempt to do it well. There's a lot of merit to the idea that just because technology can do a lot of things doesn't mean it should try to do everything all at once. Sometimes, less is more in that regard.

Because of that aspect, Forkly won't be a one-stop resource for diners seeking in-depth information about local restaurants. People should keep using their local news outlets (where dedicated experts toil night and day to cover the local scene) for that. To end on a very positive note: there's some hope that Forkly and other burgeoning companies see themselves as part of a greater community rather than living in the pre-recession mindset of trying to make as much money in as little time and by whatever means possible.

Thank you! Glad you found it informative. I also learned a few things.