Huh. Probably the last to notice, but I see the old Formaggio has disappeared from India street. 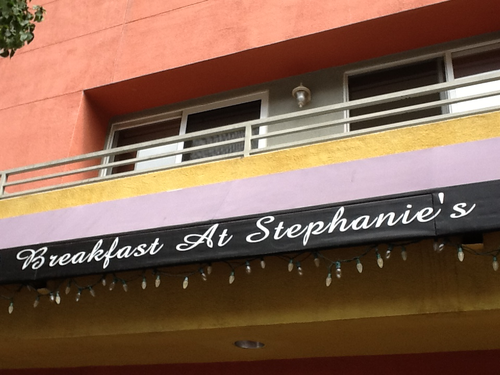 It’s in one of those cramped spaces near the Mexican consulate. But that hasn't stopped the lunchtime crowd I see lining up for sandwiches.

Oh man. Can’t resist looking in, mebbe grabbing something, a breakfast, anything with cawfee.

Because they do say on their welcome sign that this is “The only place in Little Italy serving breakfast all day.”

Stephanie turns out to be real, and glam. 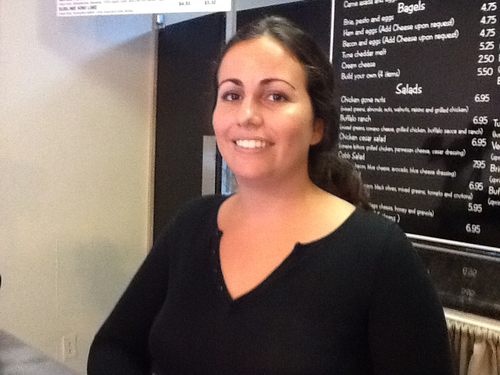 “What's the best breakfast?” I ask her.

“Carrumba!” I say, just to get into the spirit of things.

“No. ‘Mamacita’ is our best breakfast,” she says.

Oh, right. Now I see. Mamacitas. A combo of ham, Swiss cheese and scrambled eggs in a croissant with a side of fruit, $6.95.

Turns out Stephanie is from – get this – Tahiti. French-Corsican background. Half her family lives in Paris, the other half in – be still my heart – Papeete.

“I came here to get my MBA,” she says. “At UCSD. Now I’m putting it into practice.

“So what do you reckon’s the most interesting breakfast.

Love it. And now I think of it, if she’s French, she’d know her bries from her stiltons.

While I’m waiting, this guy Greg comes up to order a sandwich. 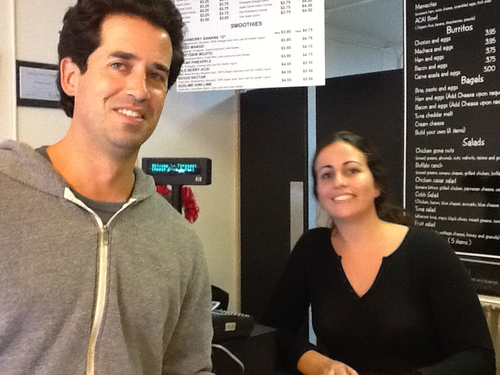 And holy moley, I guess he should know, because, turns out, he is Greg Van de Velde, the Maitre d’ at Bertrand at Mister A’s, the really classy, really expensive joint on top of that hi-rise Bankers’ Hill building that puts up those awesome lights at Christmas.

Wow. Stephanie couldn’t get a better compliment than this.

Wish I could see what he’s ordering, but as soon as Stephanie appears with my brie Bagel I’ve gotta fly. I’m later than I thought.

In the end I split it with the beautiful Carla. Well, split… 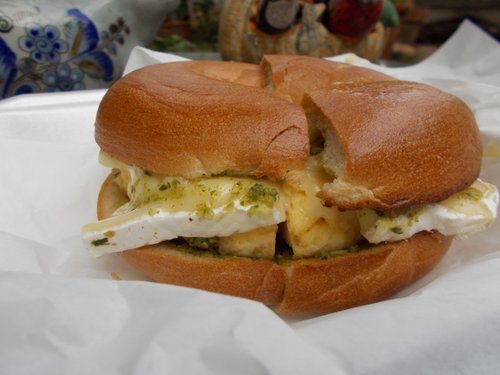 “Interesting!” she says. “Don’t usually like sloppy soft cheeses like brie, but with that pesto, and eggs…she’s French, you say?”

Actually it is soft and luscious, and okay with a little Cholula it becomes fantastique. 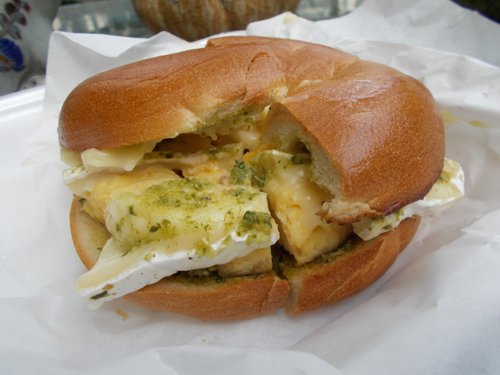 But I do have to go. Woik. I start to pack my half to take with me.

“Bedford,” says Carla between mouthfuls. “The least you can do is leave it with me.”

Been there, worked there, and promptly left there! The Turkey, Avocado, Bacon on croissant is the only thing worth a mention there. The rest is garbage.... I felt I should come clean, and thats why you should go to a place that respects you as a customer. And really, shouldn't a place called "Breakfast at Stephanie's", well, you know, shouldn't it have a lot of breakfasts? Theres my review! Tell me what you think. Or is it just me?

FatCat: Wow. I do agree that one or two breakfasts ain't a lot for a place with a name like Breakfast at Stephanie's. All I can say is what I had was good. Now maybe I'd better go back for more.

Hey Bedford, put my comment back up and let the public decide. You've obviously made up your mind.