Actually hoofing it to 12th and Imp. Twenty minutes till my stretch limo departs. Walk should take ten, so hey. Time to stop a mo and listen to Eric playing Santana’s “Black Magic Woman.” 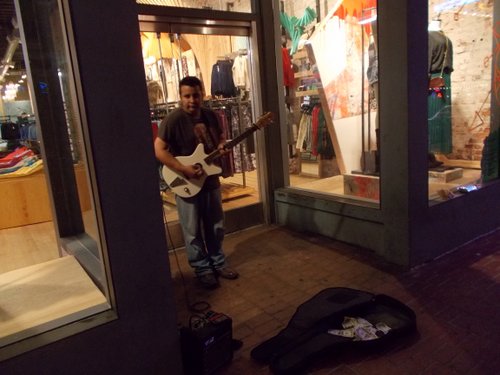 He’s standing in the entrance to Urban Outfitters’ store with his guitar case open. It has a pile of dollar bills in it.

Shows you how good the man is.

“Got your spell on me baby…”

I’ve just dropped my own Washington in his case when I notice what all the jangly lights along the sidewalk are coming from. 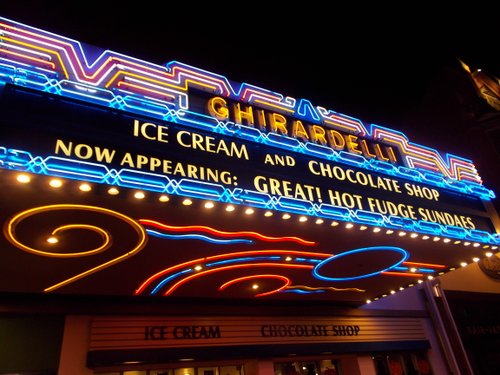 I discover this when I kinda waft in there, proverbial moth to flame. Its marquee advertises ice creams like they were shows. 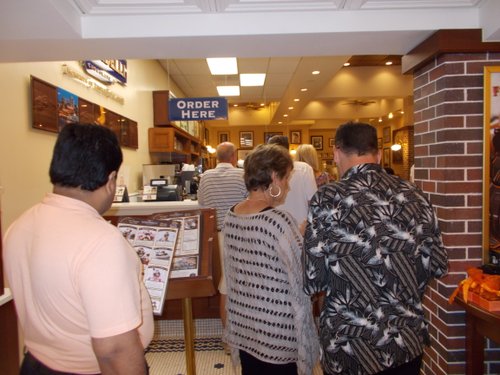 ...Yes, a line at 10:30 at night. And behind the long counter, a bunch of boys and girls are fixing sundaes, scoops, shakes, floats, straight out of a forties movie. And now comes this gal handing everyone in the line little squares of chcocolate. “Halloween,” she says. And wow. Golden-colored filling.

By the time I get up to Stephanie, the gal behind the order counter... 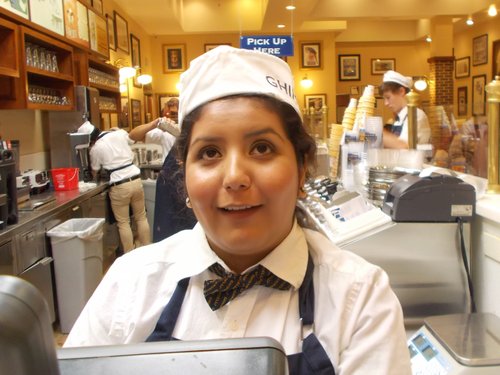 ...I’ve scanned their big colorful menu that you get to keep. 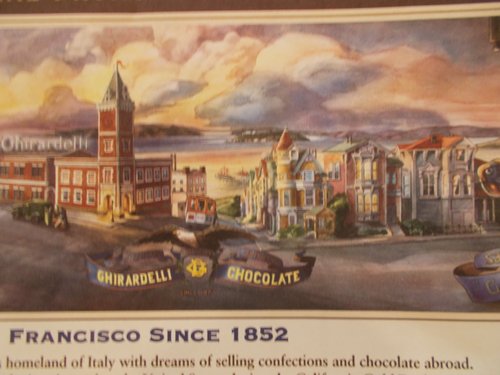 “Most popular ice cream?" she says, when I ask. "Chocolate, probably,” she says.

But the butter pecan is winking at me from the top right bucket. I ask for the sugar cone ice cream ($3.95 for one scoop). I get a little mast with a number and head outside.

Guys are schmoozing their girlfriends and vice-versa in the clump of sidewalk tables, even though a staff guy’s already stacking some of the chairs. They close at eleven tonight, it seems. People are still breaking out from the sidewalk crowds and lining up inside. 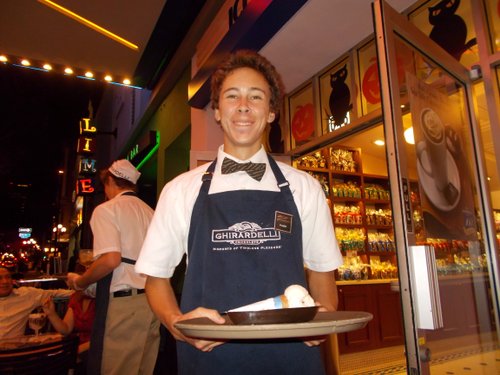 ...brings out my ice cream, a little melty, but laid down on a scooped-out metal plate. And luscious. “My favorite? he says, “Sea salt caramel, I guess.”

Wow. Didn’t even see that.

Also didn’t see that they have all sorts of cawfee here too. Could’ve had a beautiful espresso.

But this is soft, pecany and enough. 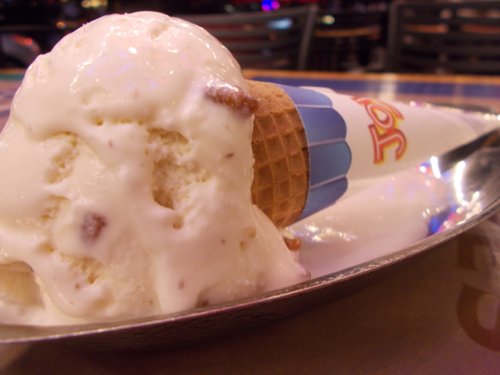 I lick, watch the world go by, and start reading the menu.

“In 1837, Domingo Ghirardelli left his homeland of Italy,” says the menu, “with dreams of selling confections and chocolate abroad. After spending ten years in South America, he immigrated to the United States during the California Gold Rush to see if he could strike it rich.”

He did. Opened his factory in San Francisco in 1852. Ghirardelli says it’s now the “longest continuous chocolate manufacturer in America.”

By now I’m using the long spoon to scoop up the melted remnants. Scrumptious!

And, truth be known, a kind of relief from all the boozing going on all around.

Next time, sea salt caramel or that hot fudge sundae from the marquee ($8.95).

I have an ice-cream tale for tomorrow.

For this, I have a hard time with being served melty ice cream. The optimum window to eat it is so short as it is!