It's actually harder than one might think to find sincere, small-batch ice cream. Even good shops often buy theirs from elsewhere. The primary reason being that ice cream is difficult and time-consuming to make. I've made plenty and getting the overrun (the amount of air in the final product) right is a pain in the neck--never mind getting the flavor on point!

But Cow-A-Bunga in Imperial Beach serves up scoops and sundaes of locally made, gourmet ice cream. 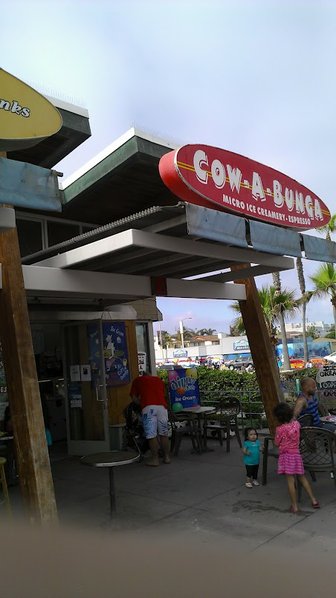 A little while back I heard from a friend that the guy who opened up Cow-A-Bunga had been successful in the San Diego restaurant industry but that he'd basically thrown up his hands in disgust and opened up a really good ice cream shop instead of dealing with the full-time hustle and bustle of restaurant ownership. Considering how many restaurants have put me in similar straits, I can't say that I blame him! 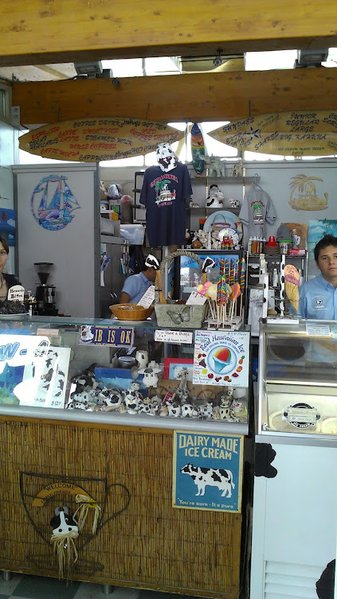 The ice cream is actually priced reasonably, too. Scoops start at $2 and sundaes and banana splits are in the $4-$6 range. That's not too bad at all, considering the quality of the ice cream. It's velvety smooth and richly flavored. It even has the chewy texture of a really good sorbet or gelato that contains a lot of invert sugar (i.e. sugar that's been cooked in a way that splits the sucrose molecule), which prevents water from forming ice crystals. In short: this is some seriously good ice cream.

And the espressi aren't half bad, either. Shots start at $1.35 and there's even an option to get the coffee served over ice cream.

Cow-A-Bunga is interesting because it maintains a low-key, almost goofy beach atmosphere and still manages to turn out a high quality product. In a lot of ways, it's much like a hip gelato shop, but it couldn't be more different in appearance. For example, it's wholly un-Euro to have stuffed cows and signed surfboards on the walls, but Cow-A-Bunga pulls it off. Probably because the ice cream is so damn good!

Ian, have you tried Niederfrank's, Neveria Tocumbo or Oasis ice cream? I'm convinced the best ice cream in the county are south of 94 & the best of the best are probably Mexican ice creams.

Haven't tried them, but I will give it a go when I can!