I have been seeing the sign on the side of Lighthouse Ice Cream in Ocean Beach for ages. "Home of the famous hot waffle ice cream sandwich," it says. I have yearned for that sandwich since first glimpsing the sign and my dreams finally came true in a moment of impulse. I found the shop, painted inside like a miniature Candyland, at odds with the seediness of Newport Street's bars and tattoo parlors, but I guess the family dollar is plentiful enough on the beach to justify the ice cream shop's locale. There's a few patio seats that provide an entertaining view of hippies, surfers, itinerant beach bums, and bikers that parade down Newport all day long. 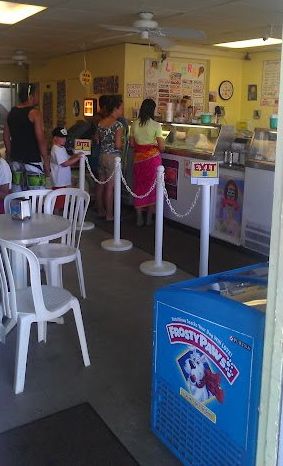 Like everything else in OB, Lighthouse is cash only and there's an ATM inside. The waffle sandwich was only $2.95, which elated me because I had prepared to spend a good chunk of change in order to satisfy such a long-standing craving. I opted for a plain waffle with praline ice cream. While I could have gone all out and used a chocolate or fruit waffle, my choice struck a perfect balance between indulgence and reservation. The waffle itself was sweet, like the real Belgian waffles that use pearl sugar right in the dough, and the ice cream was sweeter. Pressed in a little waffle iron, the piping hot confection sandwiched a scoop of ice cream perfectly.

"Eat it while it's hot," the girl behind the counter said.

I did. It was good, maybe even great. The waffle's pockets held the melting ice cream so that the wax paper bag barely contained any residue. On a scorching hot day, I would have assumed the thing would be a ludicrous mess, but it was rather dainty.

One could go insane with the idea, put cotton candy ice cream on a chocolate waffle, and incur the wrath of the dessert gods, but I think that keeping it classy and using more delicate flavors of ice cream like praline or pistachio is the way to go. 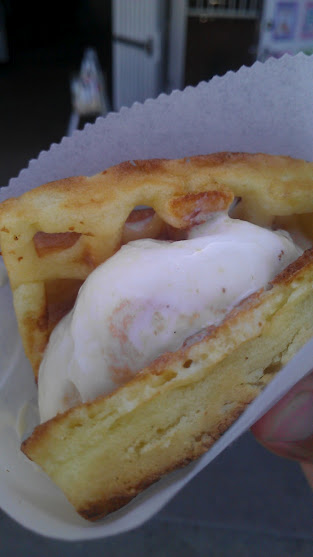 Lighthouse serves ice cream from San Francisco-based Double Rainbow. It was superior to grocery store ice cream by a country mile, but not quite on the level of the best, small-batch stuff that comes along every once in a while. It wasn't cloyingly sweet or churned in a way that incorporated too much air, so the flavors were allowed some subtlety beyond "cold and sugary."

Of course, Lighthouse serves the usual scoops and sundaes in cups, cones, and waffle bowls. Nominal surcharges appear for special bowls, but prices remain in the $2-$6 range for most things. Nothing jumps out as special in the way that the waffle sandwich does, but the good product and reasonable prices justify themselves in the end.