This Hillcrest sushi bar has a few great sashimi specials that give it serious credibility.

I popped into Ebisu in Hillcrest on a whim, tired and hungry and feeling like taking myself out to sushi. It’s proximal to me but I’ve never gone there before. I couldn’t explain why, but it might have something to do with enjoying the search for a meal as much as the meal itself. Anyways, I’ve always found it hard to judge sushi places by looks alone. More difficult than with other types of restaurants, anyways. Ebisu, I would have assumed fell into the low-end “sake bombs and overdone rolls” category, but it ended up showing a greater degree of refinement.

I appreciated the small-ish interior, muted decor, and general lack of clamor. The cozy dining room, dimly lighted and serene, had some classiness to it that you don’t quite get at neighboring sushi bars. I understand there’s a lounge with a full bar in the back of the building, but it’s only open Thursday through Saturday. I may go check it out sometime, as the scene could be cool with DJs and pretty good sushi being a weird combo that I’d like to see in action.

More than anything, I was impressed by the selection of sashimi specials ($12). Playing dress up with sashimi is a dicey affair, since it’s hard to do better than good fish and a touch of soy sauce, but Ebisu has found a way to walk that line. I tried a kanpachi (Hawaiian jack) sashimi special that had been dressed with lemon and chili oil, micro-cilantro, and a few grains of briny black lava salt. It wasn’t advertised, but I tasted a rich base of roasted goma, perhaps the chili had been infused into sesame oil.

I’ll disclaim that I prefer my fish room temperature, and Ebisu’s sushi and sashimi were all served cool. It actually worked out for the kanpachi, however, as the fatty fish was pleasingly firm at first and softened quickly. The extra flavors adorned the fish just enough to bring out something special, but not so much as to bury the delicacy of the flesh.

I strongly recommend the sashimi specials at Ebisu as long as they remain on the menu!

For the most part, I judge sushi by the rice and I enjoyed the rice served with my nigiri very much. Scallop ($5.50) and Uni ($8) both rested on top of salty, toothsome sushi rice that had been coaxed together without mashing the grains into an indistinguishable mass. I would say it was served at a good “body temperature,” although it tasted warmer in comparison to the too-cool fish. Diners should resist the urge to go crazy with the shoyu, as the saltiness of the rice is nearly perfect without addition.

Salmon skin rolls are, I think, a bit underappreciated. I enjoyed Ebisu’s roll, which housed crunchy, fried skin in the same good rice as the nigiri. With shaved bonito and sesame seeds adding a salty/savory edge to the whole creation, it was more interesting than plain salmon maki and texturally delightful. 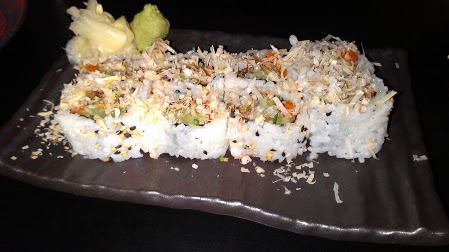 Normally, I would call shenanigans on such boastful claims, but I’ll concede the restaurant as much, at least as far as the sashimi specials were concerned!