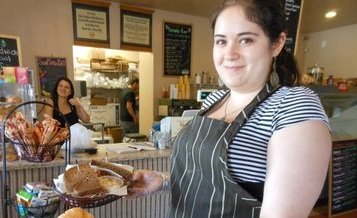 "Bedford, you’ve gotta get off your duff and jump up and down a bit,” says Carla. “And eat less! Eat nuts and twigs!” The green canopies have things like “Faith in Food,” and “Be Well!” painted on them. What puts me over the top is I can hear Janice Joplin belting out “Take it! Take another little piece of my heart now, baby…” ...and at one end, two gals and a guy kinda waiting, knives at the ready. Savina, Alex, Fadi. “Something healthy,” I say.

What I need is something healthy, but to eat.

So Fadi points to one of the veggie-only sandwiches, The Fir. (Each sandwich is named after a street around here.) “Ultimate veggie on squaw, with cheddar, lettuce, tomatoes, onion, avocado, bell peppers, sprouts, banana peppers, mayo, urban mustard.” Whatever urban mustard is.

But I go for it. Just so I can tell the lovely Carla I didn’t eat no meat today. Then I figure I may as well have a smoothie, because Fadi says they’re really good for you. Specially, like, the Hangover Remedy (apple juice, pineapple, banana, electrolytres ($3.75 for 16 ounces).

“Or the ‘Tee Off’,” he says. “It has walnuts. They’re so good. Also soymilk, honey, and non-fat vanilla frozen yogurt. Same price.”

Turns out the sandwich has quite a bit of flavor for nuts and twigs. And so much of it... The smoothie, well, good if you’re into vanilla. I cling on to the honey taste. Meanwhile, Janice has moved on to “Bobby McGee.” I’m sitting in the sun at the window they’re going to take out so they’ll have inside-outside seating. That’ll be good. Also they have an area with couches so you can hang out, take a nap, whatever. What's more I can’t finish the sandwich. But - heh heh - can take it home to Carla the carnivore. See if she’s gonna put her mouth where her money is. At least she’ll know I’m keeping the beansprout faith.