I've been to Perry's Cafe before (Barbarella also blogged it on Feast! a while back), and I loved the retro feel of the place, but wading through a sea of humanity and watching the cooks stagger beneath the weight of order after order turned me off a little bit. Lucky's is a viable alternative, in terms of old-school flair, but eating at the same place too regularly is damaging to my soul. Lucky for me, I espied the sign for Salazar's Taco Shop the other day whilst cruising through the East Village. 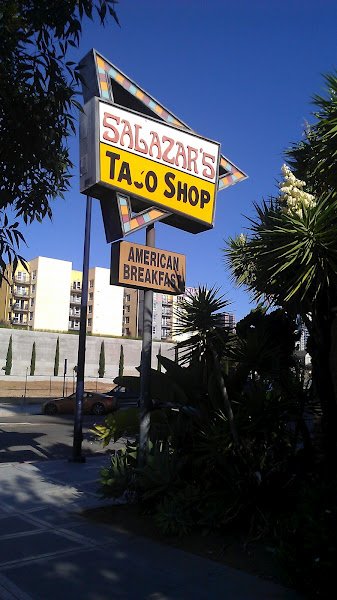 I should mention that Salazar's has a huge parking lot, much bigger than a downtown taco shop deserves. I can only imagine the value of that square footage!

Inside, I found a time capsule of retro, 1970s awesome. It was red leather, faded bricks, and earth-toned formica as far as the eye could see. Along the counter, red bar stools sat on steel beams that jutted up at an angle from the floor. There was one, extra large booth that looked commodious enough to hold eight friends, perhaps all sitting together and sipping coffee to ward off hangovers, or putting down one good meal before heading out for an adventure somewhere. I wanted to sit in that booth, but it would have been preposterous to do so alone. An auxiliary dining area on the restaurant's east side nearly doubles the seating capacity such that, lost in its own huge parking lot, Salazar's is bigger than it looks. 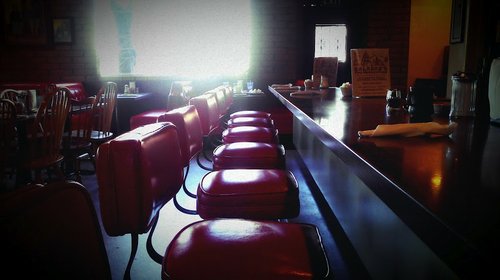 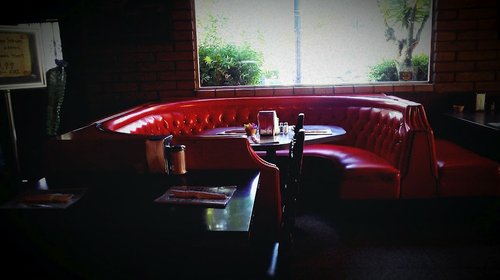 I took a seat at the counter, drank some of the acceptable coffee, and checked out the American breakfast. The section was pretty short: eggs, pancakes, French toast, or a cheese omelet. Everything cost between $5 and $8 dollars. According to a little sign by the door, the weekday morning breakfast special is two eggs, toast, hash browns, and bacon for $4.99. I had that, but asked to substitute sausage for the bacon.

The lady working the entire floor put tickets on a little carousel that turned them around for the cook to grab. He wore one of those paper hats that look like something a WWII-era sailor or milkman would wear. If there was some sort of home-run derby for well-worn, old-school touches, Salazar's would be slamming them out of the park left and right. 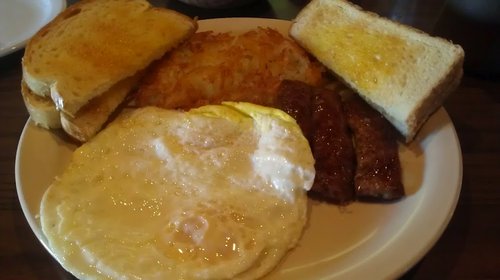 I'll admit, the breakfast was pretty average. Not any different from what I could get at Lucky's, Perry's or any other breakfast spot. Greasy sausage, ample hashbrowns, buttered white toast, and over-a-bit-more-than-easy eggs were all satisfying, but wholly pedestrian. Not that it really mattered to me, since I went for the vibe, but anyone looking for a cutting edge gastronomical experience would be well-advised to look elsewhere.

Salazar's also does Mexican breakfast (huevos rancheros and the like) and a full-menu of lunch and dinner food. I enjoyed seeing a few dishes named after obscure local figures whom I assumed were loyal customers at one point. "Chimichanga de Wolberg" was a deep fried burrito topped with guac and sour cream, named in honor of the late SDPD criminologist Gene Wolberg. Similarly, tostadas with rockfish ceviche, refried beans, and fresh avocado bore the name "tostadas de ceviche de Robinson" after another former SDPD officer.

For whatever reason, stuff like that gives a place certain, inscrutable qualities. My father has always said a place looks "proven" if it's a little worn around the edges but still kept clean and bearing the subtle traces of many regular customers. I think he would like Salazar's American breakfast, so, this one's for you, Dad!

(Personally, I want to try the hamburger with cottage cheese and pineapple on it...because I know my father would hate it.)