I had spotted this place a while back and mistakenly assumed it was closed since it's distinctively shabby on the outside. 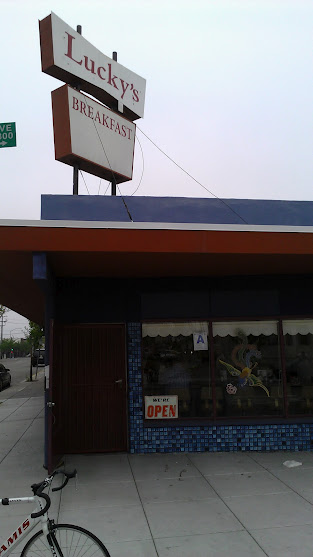 But not so! Lucky's was fully operational and apparently has been for eons. I stepped through the door and I was greeted by the strains of some Chinese zither music. The full name of the place is Lucky's Golden Phenix (sic) and the eponymous gentleman himself seems to be the only employee who works behind the zig-zag counter where breakfast is the only meal available and cash is the only acceptable currency.

When I walked in, Lucky immediately offered me coffee. Since it was only eighty-five cents for the cup (and everyone's entitled to a free refill with breakfast), I accepted. It was hot, fresh, and about as basic a cup of coffee as exists on this Earth.

As the price of coffee indicates, Lucky's is a complete and total time warp. It looks like it hasn't changed in about thirty years — even the elderly Lucky seems to be operating on decades of routine. The prices hover just north of "free." Nothing on the menu exceeds five bucks. I ordered the most luxurious item I could find, three eggs with ham, potatoes, and toast....for $4.10. After Lucky took my order, he walked back to the kitchen and cooked exactly that. It was the kind of breakfast that you might get in that little town from Northern Exposure. Anti-fancy, but not bad, not by a long shot. Lucky knows how to cook an egg and the pancakes that the little kid across from me was chewing on looked pretty perfect as well.

What can I say, I was taken with the anachronistic service model, the archaic pricing, and the Confucian vibe inside the restaurant in the early morning.

Lucky let me hang out and read for a while, he never dropped a check off or anything like that, so I just left the right amount of money and made my way out the door. Everybody else seemed to be doing likewise.

Lucky is by far the coolest cook in town. If you're ordering a lot, he'll say "Too much! You won't be able to finish that." You're right. His business model is ancient, but I guess he keeps folks like you and me coming back.

Somehow I am not surprised you're a Lucky's veteran! Good on you, sir.

this sounds like a very cool place to go...thx Ian and Ed