Something about that Suicide Sauce lit a fire in me. Not surprising, at least gastro-intestinally. But seriously, folks. Ever since I took on that mega-spicy sushi roll challenge at Sabuku Sushi, I’ve been craving similarly scorching fare. Usually, such desires go unsatisfied as dishes made using obscene amounts of scotch bonnets, ghost chilies, and scorpion peppers is a bit hard to come by. But, all of the fates aligned last week to present me with unexpected opportunities to push my taste buds to the limit in most delicious ways.

The first came during a pop-up event at Hillcrest’s Local Habit (3827 Fifth Avenue) presented by local beer-and-vegan group, LOVELIKEBEER. Local Habit chef Nick Brune put together a special menu featuring five vegan dishes based on his Louisianan roots. One jumped off the page for me—etouffée. I am a huge fan of Cajun and Creole cuisine, and etouffée is my favorite of all. I make it several times of year at home, using crawfish, shrimp, chicken, andouille, duck. Any protein is at home smothered in a velvety roux-thickened sauce made vibrant with generous additions of cayenne pepper. For years, this dish made watching pre-Drew Brees Saints games a tolerable activity.

But this was a vegan dinner. I wondered what Brune would use as the base for the recipe. As one might expect, he went with crimini mushrooms, fungi plump enough that, once they’ve absorbed stock or gravy, take on a meaty quality. But it wasn’t the mushrooms that sparked my interest. It was the addition of huitlacoche, blackish corn fungus that’s a Mexican delicacy and also goes by the nickname “corn truffle” because of its earthy flavor. 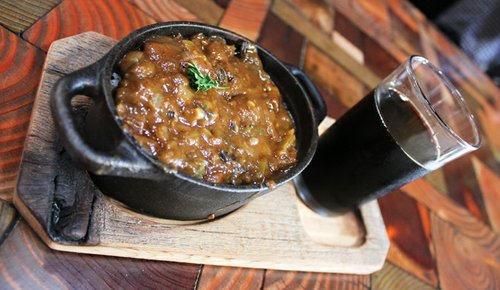 I ordered up and was quickly provided a small cast-iron vessel filled with a bottom layer of white rice topped with a dark chocolate-colored concoction reminiscent of gumbo (traditional etouffée ranges from tan to reddish-orange in color). I dug in and was pleased to find that, even without meat or seafood, it was scrumptious, and still brought all the familiar Cajun flavors I enjoy, particularly the spice. It was actually one of the spiciest etouffées I’ve ever had.

I proceeded to wipe large beads of sweat from my brow for over 10 minutes after consuming the dish (of course, it didn’t hurt that it was 98 degrees and humid—very New Orleans—and I was foolishly dressed in a shirt, tie, and slacks). It took me by surprise, but I loved it and hope that Brune adds it to Local Habit’s regular menu, at least as an occasional special. Maybe in the winter, because as I walked away, I vowed not to indulge in such fiery food during the highpoint of summer.

That promise lasted exactly 24 hours. The next night, I was in San Marcos, having beers with friends at Churchill’s Pub and Grille (887 West San Marcos Boulevard). Usually, alcohol and primal instincts lead me to order their big, heavily topped burgers. The Kobe beef, pancetta, and black truffle cheese Parliament Burger, and Sunrise with Hollandaise sauce and an over-easy egg are mammoth in size and flavor. But they pride themselves on presenting an authentic array of UK staples. Fittingly, this includes some Indian-inspired dishes. 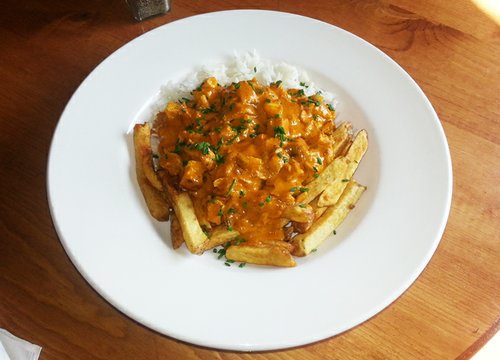 I’d been eying their chicken tikka masala for years, but had never ordered it. This was going to be the night. The menu says it’s, “a mild curry served over Basmati rice or chips,” but when I heard I could get it spicy or “Ivan hot” (named after owner Ivan Derezin, who loves hot food and has a hydroponic setup behind the restaurant where he grows numerous exotic and insanely hot chilies), I couldn’t resist…even though I knew I probably should.

Bright orange and smelling of exotic Eastern spices, it was served spooned atop a half-and-half bed of chips (fries) and rice, per my request. It looked harmless enough. I took a bite. The first thing I tasted was a nice tomato-like fruitiness and a pleasant melding of multiple seasonings that was slightly sweet. After that, the world went white…white hot!

It was the type of scalding heat that actually hurts your mouth. Not just your taste buds, the roof of your mouth, the back of your throat, and everything it touches as it slowly works its way through your being. But I liked it. The dish, made using a special paste imported from the UK, is absolutely delicious, with so much flavor it actually manages to make itself known beyond all that ghost chili (and a proprietary list of other ingredients that add its heat and taste).

The burn lasted for quite some time, but the memory of this dish, and that etouffée, will stick with me forever. With any luck, you’ll be able to try both if spicy food is up your flame-blackened alley.