I feel as though Hong Kong Restaurant has watched fashionable spots and hip joints come and go as the Hillcrest scene has developed. After all, drunken scenesters are the number one candidates for late night Chinese food on the quick. Years of sitting there in semi-squalid pallor, neon signs glowing like the opening scenes of Blade Runner, have paid off and given Hong Kong a reputation as a go-to spot.

Sure, maybe the dim glow of the ancient lights make the dining room look a little...dystopian. After dark, It's almost as if the sun has never shown on the inside of the restaurant; as though generations of dreams have died in the kitchens, burned away over a smoking hot wok. 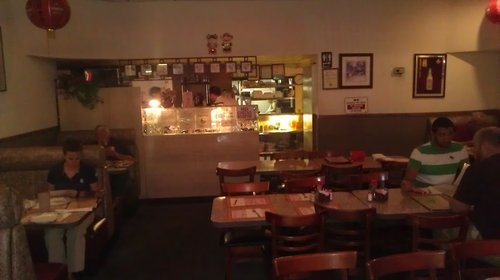 Looks aren't everything though and that run-down, shabby, hole-in-the-wall look is charming once you get inside and cozy up to a pot of hot tea, reading your fortunes in the zodiac placemats. Of course, the waiters are friendly, happy too help, and ruthlessly efficient as they bustle about the dining room and speak in clipped Chinese. The food that comes out of the kitchen's recesses steams and promises satisfaction.

In a rush, I ordered takeout instead of lingering. Some other day, perhaps, I'll occupy a booth and sit forever drinking hot tea late into the night.

The menu contained enough options that I could have sat and contemplated without an end in sight. I chose a simple "that looks good" approach that served me well in the long run.

Steamed buns ($2.95) were filled with sweet and salty nondescript meat that was probably pork but tasted of Hoisin sauce. Fried chicken wings ($6.95) were covered in garlic and scallions. The breading was thick and salty, concealing fatty, rich chicken that required serious efforts to chew from the bone, but not in a bad way, more in a "rise to the challenge" way. 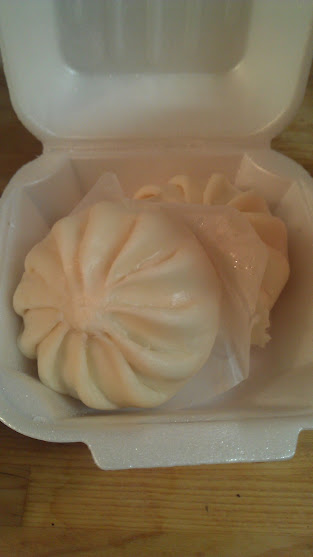 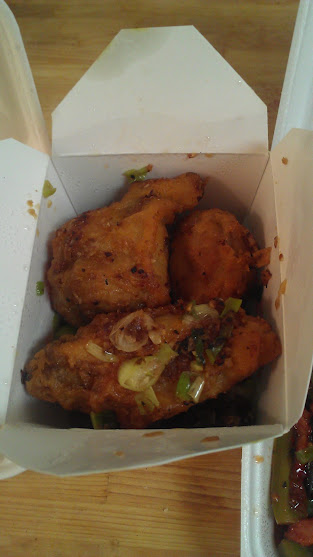 On the menu, Yu Hsiang pork ($9.95) bore the little chili-pepper icon emblematic of a spicy dish and, though it brought forth zesty overtones of Szichuan pepper, it's spiciness was ultimately restrained. Most people would find it easy to eat. The kung pao triple crown--featuring shrimp, beef, and pork for $12.95--could have been smothered in the sweeter cousin to the Yu Hsiang sauce. Both dishes were amply portioned, enough for two meals, and contained oceanic volumes of spicy oil. It was a light oil, so the effect wasn't overwhelmingly greasy, and it carried all the salty, spicy, umami flavor that I expected out of the dishes. 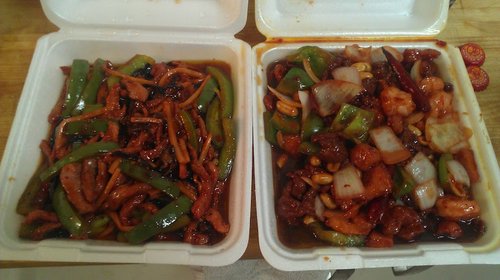 There was little to distinguish the two dishes, and I predict that most of Hong Kong's food follows the same pattern: huge portions of meat, smothered in flavorful sauces, served piping hot and very, very quickly. I would say that the price was only somewhat justified, as dinner for two cost nearly $40, so that's the major hang-up. Getting at least a meal-and-a-half is only partial compensation because, while re-heated Chinese food is pretty amazing, there's no denying that leftovers lack charm.

But, hey, when it's late and you've had a few drinks, Hong Kong starts to look better and better until, wooed by the its divey charms, the wings, barbecued pork, noodles, and chop suey work their magic.