Well, I liked Tre Porcellini, the Italian place that was next to Baja Betty's and closed down a little while ago, but I was happy to see that the new place in the location was my current favorite sort of restaurant.

Akinori is the fourth (4!) izakaya to arrive in Uptown San Diego. I say, the more the merrier. It's only been open for a fortnight, but the Japanese tapas and sushi restaurant shows a lot of promise. The service was definitely not 100% nailed down, but the net effect was more charming than bumbling and when things become more seamless there (which they will) the place will be a winner.

Like Tre Porcellini before it, Akinori is spacious inside and almost grotto-like because of how the center wall partially divides the dining room. The low sushi bar is the place to sit if you plan to do what I did, namely order items one at a time and build a meal by bits and pieces.

There's plenty to drink in terms of sake and Japanese beer, with some bottles of rice wine bumping up towards the $80 range. Nevertheless, the house hot sake ($5) and a $1.50 cup of green tea is more than adequate for fiscally prudent fans of Japanese food.

Sushi and tapas comprise the bulk of the menu, though there are a few entrees and an interesting $60 "omakase" option that appears to be a tour de force of Japanese cookery. I disregarded the specialty rolls, though not for lack of curiosity about the $25 monster that featured plenty of bluefin tuna belly.

I started with a sunomonu salad of scallop and halibut sashimi, seaweed, nori, sesame seeds and a splash of ponzu. The sweet/salty/briny combination was a great way to start of a meal and I took note that that scallops seemed to be of exceptional quality, fresh in flavor and firm in texture. 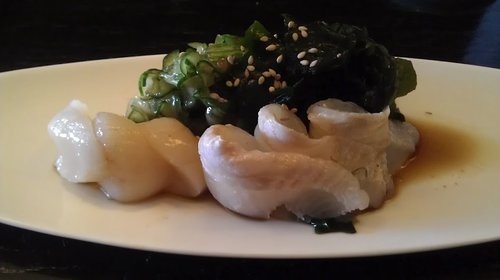 Afterwards, a plate of buckwheat soba noodles in pesto highlighted the captivating flavor of Japanese basil (shiso) in a rich, creamy sauce loaded with mushrooms and tomatoes. Perhaps Tuscan-Japanese is the new thing? 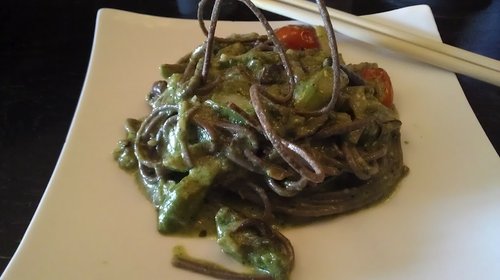 The surprise highlight of the evening, mackeral in miso sauce, was a big improvement over how mackerel is usually served. I find the leathery texture of the oily, little fish unpleasant when it's served as nigiri, but the fish I received had been filleted with much of the fat and skin left on, which contributed a welcome richness to the dish. The super-salty miso sauce would have been overkill on most fish, but on the pungent mack' it was delectable. The unassuming piece of poached fish had a velvety texture and succulent flavor that I'll not soon forget. 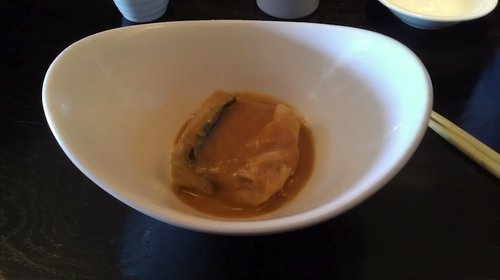 Turning to sushi, I sampled a few pieces of nigiri. Sardines, which I don't recall seeing before as sushi, were a distinct novelty. They had been lightly cured and dressed upon serving and the salty morsels were excellent with hot sake. Halibut belly was the major flop of the evening, if only because it seemed to have been trimmed imprecisely and some tough connective tissue gave the sushi a frustrating texture.

In a welcome move, the sushi chef applied wasabi and soy sauce to the sushi before serving it to me so that I didn't have to mess around. In conjunction with the delightful, not-quite-warm, chewy rice, the sushi was ready to eat as it was served to me and I'd recommend other diners refrain from draining their sushi in horseradish and soy sauce--save that for suspicious grocery store rolls. 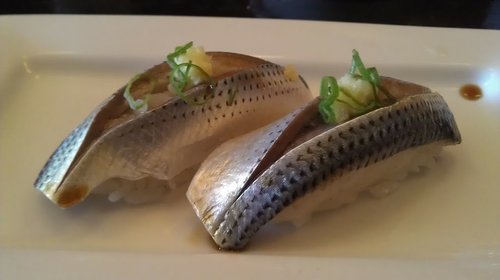 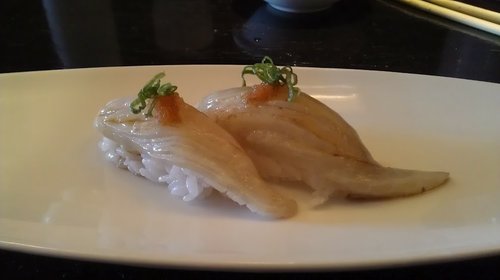 Finally, a serious contender for "best thing I've recently eaten," a live shrimp capped off my dinner. Beheaded and swiftly prepared while still wriggling about, the shrimp's tail made a delicate, sweet, piece of sushi with an intriguing texture that reminded me of confectionary. After I ate the tail, the staff removed the head and dunked it into the fryer out back. I was encouraged to eat the whole thing, shell and all, and I'm glad I didn't hesitate. The taste of the head was intoxicatingly sweet and the shell was one of the crunchiest things I've ever eaten that was still edible. Truly delightful. 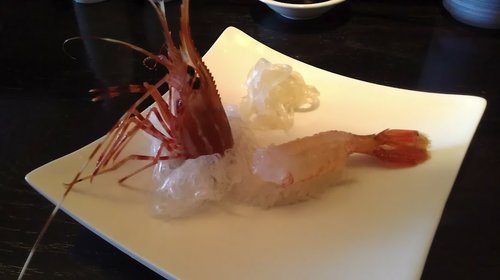 I realize I've raved a bit here, but I think it was deserved in many ways. Akinori is clearly quite ambitious in its efforts to provide quality food. The poorly printed menu (it really does require line editing) and the inexact service point out that there is a degree of settling in to before Akinori justifies its price (I spent over fifty dollars easily), but if the place achieves its goal the neighborhood will be much better off.

Oh man. Just the photos have got me drooling. And that final dish. Shrimp are like rabbit: the fresher the better. Beautiful descriptions.