I was first introduced to Waters Fine Foods and Catering by Andrew Spurgin. At the time, the chef (well known in Slow Food circles as a renaissance man with a devotion to classic cooking techniques, an insatiable appetite and interest in esoteric international cuisine and ingredients, and a passion for promoting the glories of the local foodscape) was at the helm of the business.

Under his direction, they put out arguably the best catered edibles in the county. He spent many years building a stellar reputation for himself, his food and the company, before being lured away to his current post as one of three big-name chefs (the other two being Brian Malarkey and Antonio Friscia) behind the year-old, glitz- and glamor-geared Campine Catering. The move made sense, but also came as a bit of a surprise considering how long he'd been at Waters and how synonymous his name was with his employer's.

I have many fond memories of Waters, all of which come courtesy of Spurgin's food, which was always very clean, straightforward, elegant, and tasty. One of the best I recall is spending a day in Ballast Point Brewing & Spirits' brew house behind Home Brew Mart in Linda Vista. We had just added some hops to the brew kettle when, all of a sudden, an unexpected delivery of sandwiches, salads, and crudites arrived. Apparently, the staff at Ballast Point had struck up a friendship with the chefs at Bay Park's nearby Waters Fine Foods kitchen, and regularly traded growlers of beer for lunches like these. The food was tasty and fresh and, until last week, my final taste of Waters' fare.

On Thursday, I headed back to Bay Park to check out Waters' new cafe (1122 West Morena Boulevard). It's located in the space that formerly housed a Subway. The following statement may be semi-sacrilegious given Michael Phelps' recent success, which as his commercials attest can be largely traced back to a diet of five-dollar foot-longs, but to heck with it: this storefront just got a huge upgrade. In place of Spicy Italians, Cold Cut Combos, and Ultimate Veggies are more refined sandwiches and nicely cooked vegetables more worthy of the latter billing. 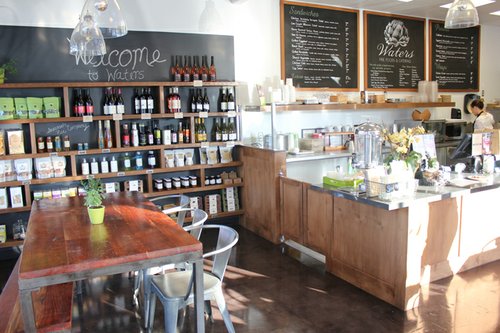 I called in a order and brought it home to a hungry family. I could have been nearly as comfortable and quite inclined to hunker down at the cafe, which is bright and tasteful in its minimalist approachable upscale deli decor. That said, it was nice to get a spiffy, durable, Waters logo-adorned bag to carry my purchases home in, so it worked out nicely. 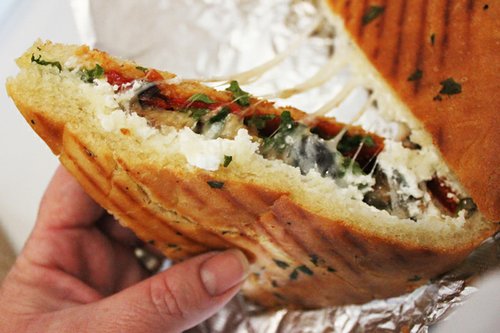 The individual items I'd ordered were packed appropriately to keep hot items warm, and cold items nicely chilled. Given the horrendous traffic on the freeways that afternoon, this proved very helpful. By the time we broke into a goat cheese, mozzarella, pesto, arugula and roasted pepper panini, it was still pleasantly gooey and stringy. The vegetables inside were nice, but don't order this one expecting them to be the star of the sandwich. This is a grilled cheese through and through. The Laura Chenel chevre is boldly acidic, and plentiful, and the mozzarella provides structural background and some salt. 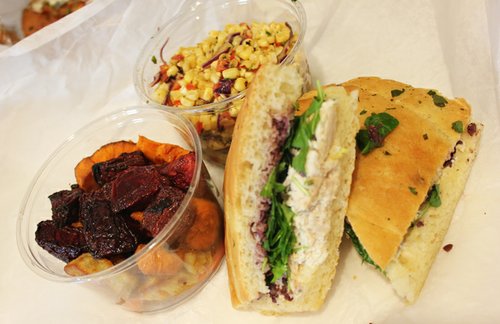 A tuna sandwich has sizable chunks of tasty albacore and a healthy slathering of olive tapenade. There's so much of it, it overtakes the entire sandwich. Not a problem if you love Kalamatas, but a bit disappointing if you really want to taste the tuna or the lemon aioli that I was unable to pick out at all. The best part of that sandwich was the house-made focaccia. Herbaceous, fluffy, and buttery (even though it is almost certainly made using only olive oil), it makes up for almost any filling-related shortcomings. 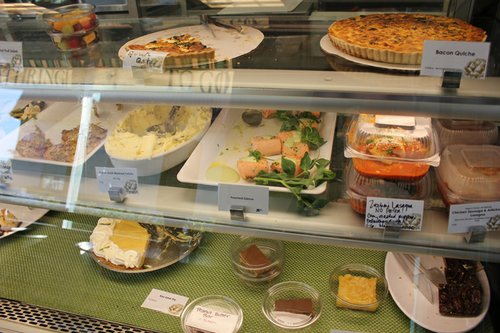 Roasted root vegetables (sweet potatoes, yams, carrots, and beets) tasted out of season, but very good thanks in large part to a blood orange oil dressing. There was one exception. The beets were bitter to the point of almost being inedible. I'm not sure what the problem was there, but it was particularly disappointing given the fact Spurgin fixes beets better than just about any chef in San Diego. This was a long way for those magenta tubers to fall. A bright corn salad was particularly impressive. A while back, my wife discovered a really satisfying recipe for a sweet corn salad that we make easily a dozen times per year, and we were both surprised to find this was even better than that family favorite. It was so naturally sweet it could have filled in for dessert in a pinch. 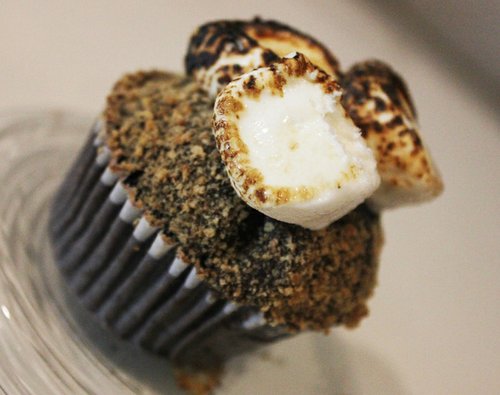 As it was, we went with a s'mores cupcake and a peanut butter bar. The former had three toasted marshmallows on top and a thick, hardened layer of chocolate at its core. The only thing that could have made it better was more Graham cracker presence, but it's more than fine just the way it is. The bar was nowhere near as sugary as most PB desserts, which I appreciated. Another plus was that both desserts were presented in just the right quantity where you could finish them off without sending yourself into a sugar coma or on a one-way trip to stomach ache valley.

The food is still comparable to what it's been for years. Add the nice new location and the pluses and minuses combine to keep it pretty much at the same level. Considering Waters' reputation that's pretty darned good.