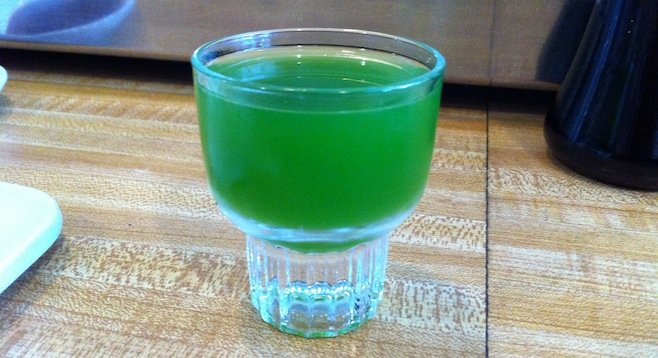 In a bid to try something new, my man and I broke out of our comfort zone one recent Sunday to seek out uncharted sushi territory (at least, uncharted for us). We turned to Pacific Beach, an area we usually reserved only for quick visits to Great News!, our favorite cookware store in town. While I drove, David googled and yelped and chowhounded until he narrowed his search to three potential places on Garnet Avenue. We eventually found ourselves at PB Mika Sushi. It was a basic place, with basic decor. Some TVs tuned to the Olympics, a handful of people scattered between the sushi bar and the few tables lining the opposite wall. Nothing stood out, save for the food (I'll get to that), and Asako, the owner and our server for the afternoon, and the person who transformed a hole-in-the-wall-on-the-main-drag sushi joint into a destination spot for these two sushi-loving foodies.

I was happy to see shrimp dumplings on the appetizer menu. We'd tossed around the idea of getting dim sum, but David had a hankering for sushi. Now both of our cravings could be satisfied. It was a lovely little plate -- the fresh steamed dumplings were served on a bed of cabbage with a lemon wedge, and a spicy ponzu sauce for dipping. We ordered a few rolls, and were delighted when they were each served on unique, wabi-sabi style dishes, reminding us of the many good meals we've had in Japan. The sushi itself was delectable. We were both partial to the shrimp crunch roll, particularly because the crunch was very crunchy, indicating its freshness; the crispness was a pleasurable contrast to the soft chewiness of each bite. Things were not as crispy with the Las Vegas roll. There's a reason all things Vegas should stay there. I went against David's sensibilities and ordered the roll, which contains cream cheese (David, a sushi purist, couldn't even look). I didn't realize the entire roll would be fried. I sucked up the guilt most reserve for the County Fair (where everything from cookies to your car keys are tossed in the fryer) and sampled it anyway. Because the whole roll was fried, the texture was not crunchy, but borderline soggy. And I could see why David took issue with cream cheese (both texturally and flavor-wise) in a sushi roll. This one was not my favorite. I did not try the Dragon Roll (a California roll with fresh water eel on the outside), but David seemed to enjoy it, down to the last grain of rice on the plate. "What's that?" I asked, when I saw Asako, the woman behind the counter, refilling glasses belonging to the two guys next to us with an opaque green liquid.

"It's my own creation, it's not on the menu," she said with a conspiratorial smile. "I only make it on Sundays, and share it with my repeat customers. I like Sundays. Want to try it?"

David and I were all nods. Asako fetched us two shot glasses and filled our glasses, and a third for herself, so she could all kanpai. "It's green tea with Japanese vodka -- shochu," she explained as we sipped.

"This is delicious," I said. Shochu, I knew, is not as strong as vodka, but it packs a heavier punch than beer or wine. I smiled and proffered my cup when offered a refill. From the strong green color, it appeared (though I did not verify) that she had used matcha green tea powder. From the look of the glass, I expected an alfalfa flavor, as with hot matcha, or even Starbucks matcha latte. But this was light and sweet, without being cloying. It was refreshing and dangerously easy drinking.

As we bid farewell, Asako said, "See you next week!" She was half-joking, but David and I exchanged a serious glance.

"You just might," I said. Some friends have repeatedly urged me to check out the good eats in Pacific Beach. I rarely do, as the area has not been in the path of my stomping grounds. But now I know my friends were right when they said P.B. has hidden gems. And some of them are green.