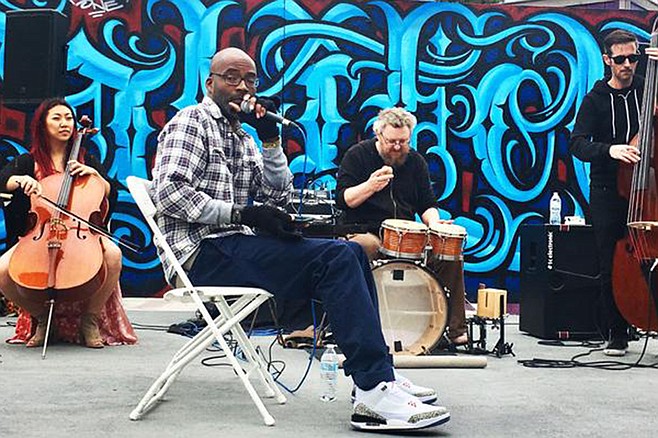 “When they called our name, it felt like opening a door to a surprise party”

Drummer/ bandleader Nathan Hubbard has had his share of success at the San Diego Music Awards in recent years, winning “Best Jazz” in 2017 for his album Furiously Dreaming, and in 2014 for his sprawling 5-disc collection Encinitas and Everything After.

How much of a surprise was it?

“It came as a total shock,” says Hubbard. “To the point where I forgot to thank Sharon, who played on the record. I mean, I didn’t even have a speech written, so when we got up there, I drew a total blank.”

Frontman King concurs. “When they called our name, it felt like opening a door to a surprise party,” says King. “Then being compelled to make a speech — I definitely wasn’t ready for that.”

Where did the band name come from?

What is the goal of Parker Meridien?

“We just wanted to create interesting music that comes out of hip-hop, and I think we’ve done a good job,” said Hubbard. “We didn’t set out to sound like a funk band or a jam band. I wanted people who came out to see us to think ‘Yeah, that’s hip-hop.’ When you play to audiences that are only used to seeing an emcee and a deejay, you might have to win them over with a live band, but I think we’ve gotten past that.”

“I thought the audience was really into it,” recalls King. “If you’re just playing for yourself, they’ll just kind of watch the spectacle, but if you’re really interactive — they’ll give you that energy back.”

So how did they celebrate?

“We went to the after-party at the Casbah,” says King. “And from there, we celebrated with post-award burritos at La Posta in Hillcrest. Nathan knows all the places that are still open at that time in the morning.”