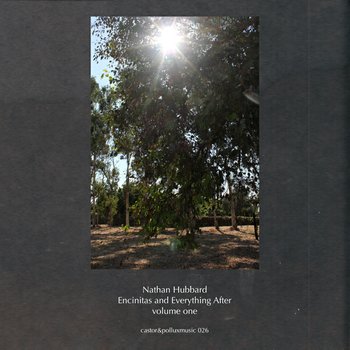 Encinitas and Everything After Volume 1

Encinitas and Everything After

Over the first five months of 2014, Hubbard released his five-volume album set Encinitas and Everything After, with one volume coming out at the end of each month. "Sometime in the late 1990s, I began writing pieces for this collection," says Hubbard. "As the years passed, I would write pieces, record them with different groups I was a part of, and then I archived them for a release at some point...all of the music has something to do with Encinitas, whether historical or geographical, and includes over five hours of music, featuring unheard or unreleased tracks from Cosmologic, Return To One, Ogd_S(11) Translation Has Failed, Everything After, Hourglass Ensemble, and many more."

Volume one has mostly medium size groups, often with two horns on the frontline, and fairly compact compositions. Volume two is larger groups, sprawling piece often based on modal vamps, dealing with waterways. Volume three is more chamber ensemble-esque, through composed pieces for medium sized ensembles. Volume four is noisier and more beat oriented, with the use of samples and antiphonal ensembles used through-out. Volume five is back to floaty melodic material with a variety of ensembles.

"Although I hate the term 'programatic music,' much of this music is inspired by places or people in Encinitas. My great-grandparents moved there in the 1920s and built their first house. My grandfather was in the first graduating class of San Dieguito High School and started his company 1948. My mother and father met in Encinitas and raised their family there. I spent the first thirty-some years of my life there."